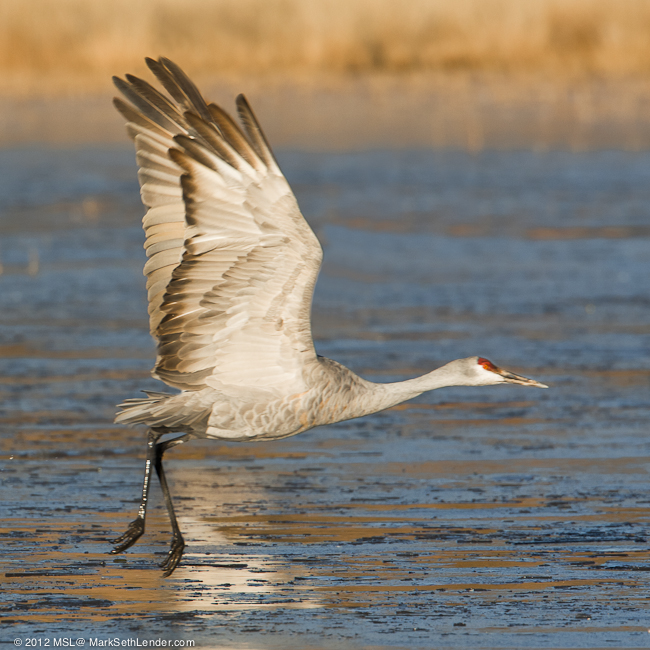 Sandhill Cranes: Salutation to the Sun

Patient, elegant, Sandhill Cranes linger upon the flooded plain. Patient and austere. Here by night for the shallow safety this boundary of water provides, they stop to rest a while. For the sake of the food they found nearby they linger, and pay homage, a temporary domicile, a temporary feast. Turning toward the East they form a long and upright line, and prepare their Salutation to the Sun.
They are in shadow, below the worn down mountain that looms, and like the landscape though weathered and tread upon by boundless heat, by bottomless cold, Cranes persevere. Waiting. Then walking one by one they arrange by reference to the low steady wind. Barely ruffling they slowly bend, like stalks of wheat heavy with seed. Watching. Stillness heavy in the air, they breathe. Then comes the golden scimitar of sun. And catapult themselves into the glare – and they are gone.
Two remain. Only two. They lean as if their muscles are spring steel. The ice in bracelets crackling at their feet stepping high they break clean away, loping slow they gain ground and speed, wing beats so deep they kiss the crystal clear beneath, until at last they rise. They make the long turn down the lake, a shadow play in tandem not a meter below their elegant forms. These two, among all others, truly mated pair.

The Sandhill Cranes are extraordinary. Usually, when I travel far from home for birdlife I hope to see many kinds of birds. But this one species is more than sufficient reason for the trip. Here’s an interview which my editor Eileen Bolinsky did with me about the Sandhill Cranes of the Bosque del Apache where the birds winter over before their long spring migration to the points far north.

How “Swimming with Beluga Whales” was made

I was staying at The Seal River Lodge and had the opportunity to go out in one of their pontoon boats to swim with Belugas. Beluga Whales, tolerant as they are of arctic water, will congregate at the mouths of rivers where it’s warmer. Warmer means in the low 40’s F, an immersion temperature that will kill you in less than an hour and a dry suit is a necessity even on the surface. After I suited up, I was towed behind the boat at a couple of knots, using a snorkel to breathe. The towing makes it easier for the whales to keep pace. And they do, deliberately making eye contact as they swim alongside.
What calls the whales is to sing. I began with the Flower Song from Lakmé (a duet for soprano and mezzo – obviously I am neither) and I can say with authority, Beluga Whales are aficionados of the opera – and – the most tolerant critiques you can imagine.
Actually, any relatively high-pitched sound will attract them, even the squeak of teeth against mouthpiece which you can also hear in the sound track. Perhaps what fascinated me the most, despite that I my underwater vocal repertoire was crude and inept, they sang back to me with great variation and complexity, as if the effort to communicate itself was both appreciated, and understood.
– Mark Seth Lender

From the crows nest Hudson Bay is verdant, all aglow, green as the land. Ploughed by flukes and pectoral fins the surface churns in lazy furrowed rows. The hours grow short. The day drifts. The season of sun is coming to an end.
There she blows! White Whale! We tack toward the spray…
Less than a fathom down, herded close in the wavy light that bathes their spouts and warms their bones; steady and slow. On the black ground of the sea, calved from snow and floating ice, these are the full-grown. Between them, all in gray, are the young and the very young who cling at the breast that is full as a world. From the low boat, I watch whales rove. Their backs rise like half-moons, and their spray rainbows.
There she sounds!
Hudson Bay opaque blue, rough as a cooper’s file.
Weather crowds her now. A hard peace abounds…
In hood and dry suit I tumble in. I am patient, face buried in the coal-cellar dark of water. Only the perilous emptiness now. Not one whale… It is said if you sing to the whale, whales will come, and sing in reply. I give them opera in drowned tones. And as the notes drift down shadows play below, and at the second stanza I am surrounded. And if I stop they leave and if I sing they stay and now sing back to me. Then, with no warning, as if to mark and take my measure, a whale takes the fingers of my right hand gentle into her mouth, and lets me go.
Now the Arctic winter sets and the pack ice grows thick as rock pressure ridged into giant loaves. And I think of that parting kiss and wonder if she dives to great depth and with that same mouth rips squid pod from limb and tears the codfish from his fins or swallows him whole? Or is she now among the eyeless carcasses I’ve seen, Belugas stripped of their fat and the meat left to rot on the bone?

Churchill Wild contributed major support to the fieldwork for this segment. 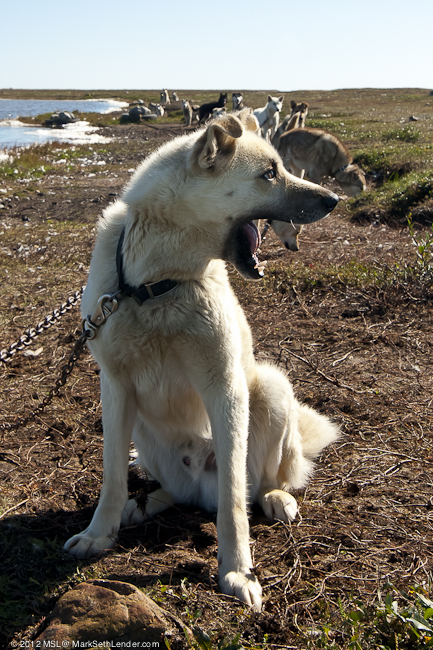