Prairie dogs are to the prairie what krill is to the ocean. Without them, that sea of grass is a dead zone. Mark Seth Lender visited a prairie dog colony in Grasslands National Park, Saskatchewan. What impressed him the most was not their value, but their bravery: 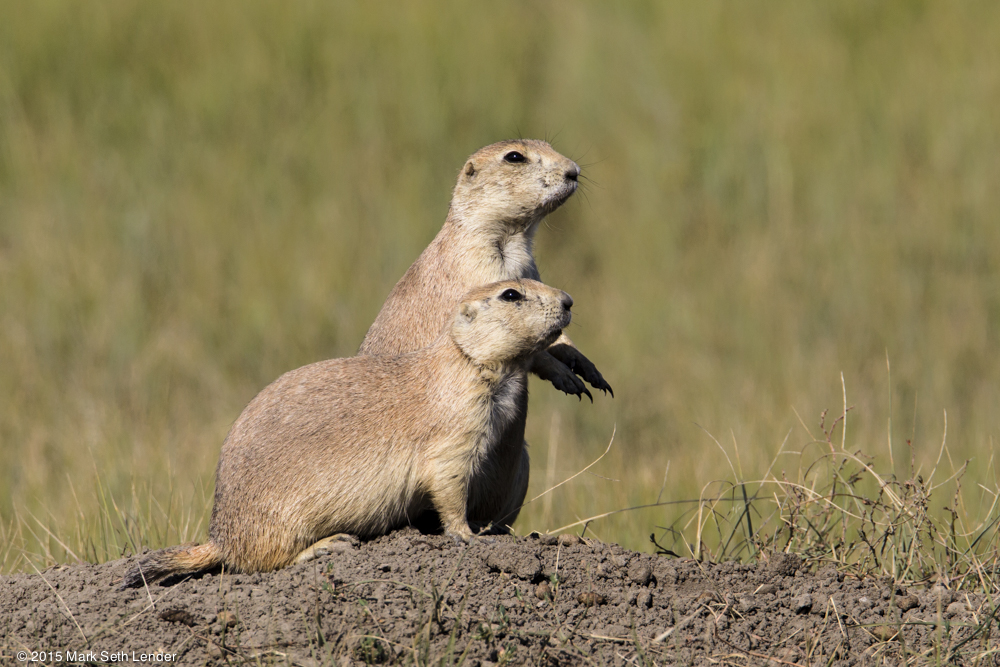 Dog on Guard does a jump-up bark, jump-up bark again. And all over Prairie Dog Town all the other dog guards jump-up back: below that ridge; up on the knoll; across, in the open, below the shadow of the mesa that rises like a wall. Must’ve seen some thing, some one. Got them started like the tattoo on a child’s tin drum. Could have been a hawk rolling on silent wing in the bright morning air. Could have been coyote, hungry enough, prowling the prairie on a daytime walk. Coulda been prairie rattlesnake sliding across the sunlit road with her rattle in the air. But our eyes are pretty much as good as any Dog of the Prairie, and I haven’t seen a thing round here. Perhaps they only jump-up bark to say: “I’m at my post, I am on guard, I’ve got your back.”

And the prairie dogs not on guard go about their business:

Dog chewing on a blade of grass like some old farmer. 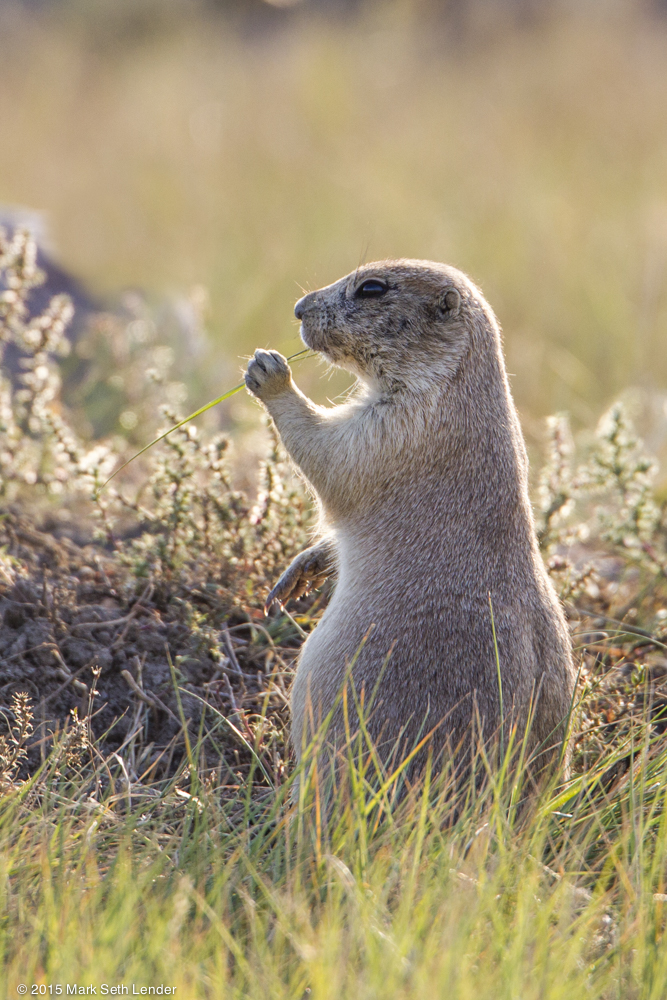 But now Dog on Guard crouches like a spring held in place by the thickness of a hair. And it’s jump-up bark nose in the air mouth in a howling shape. This time quite clear what he sees: 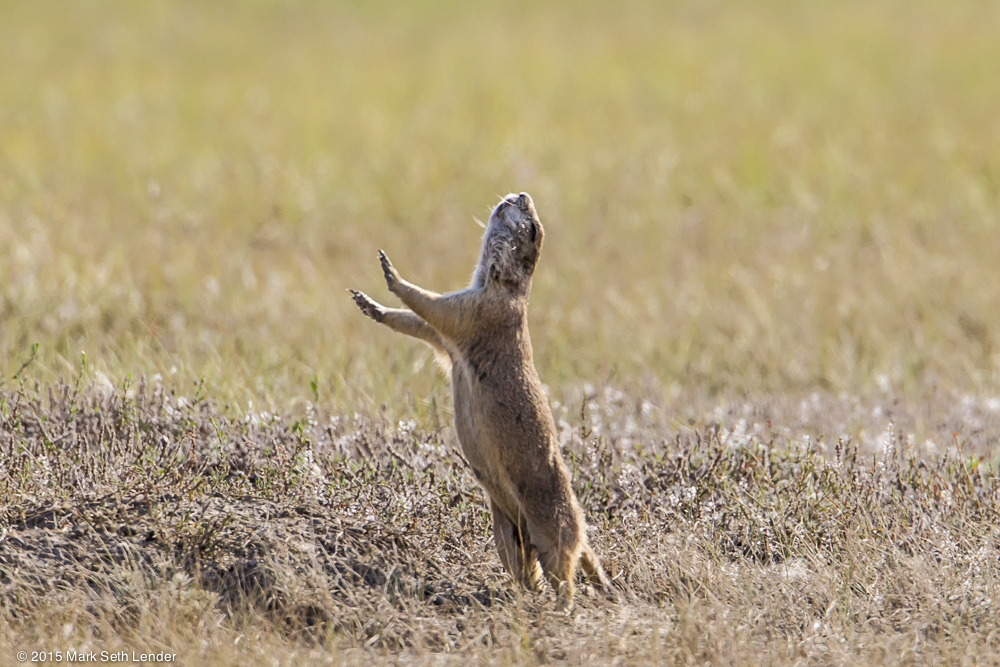 Three nights ago badger came here on a raid. Tore the hell out of that mound over there like a steam shovel on a bad-drunk-day. Claw marks in the soft dry dirt, square and long and straight (and sharp as a cut nail rake). And, on the parched clay where water puddled in the rains (the cracked landscape laid out like tiles on some abandoned floor) there are skulls. A jawbone, incisors pointing up like tusks. A skeleton where a ferruginous hawk made a kill, bones laid out in perfect parallels 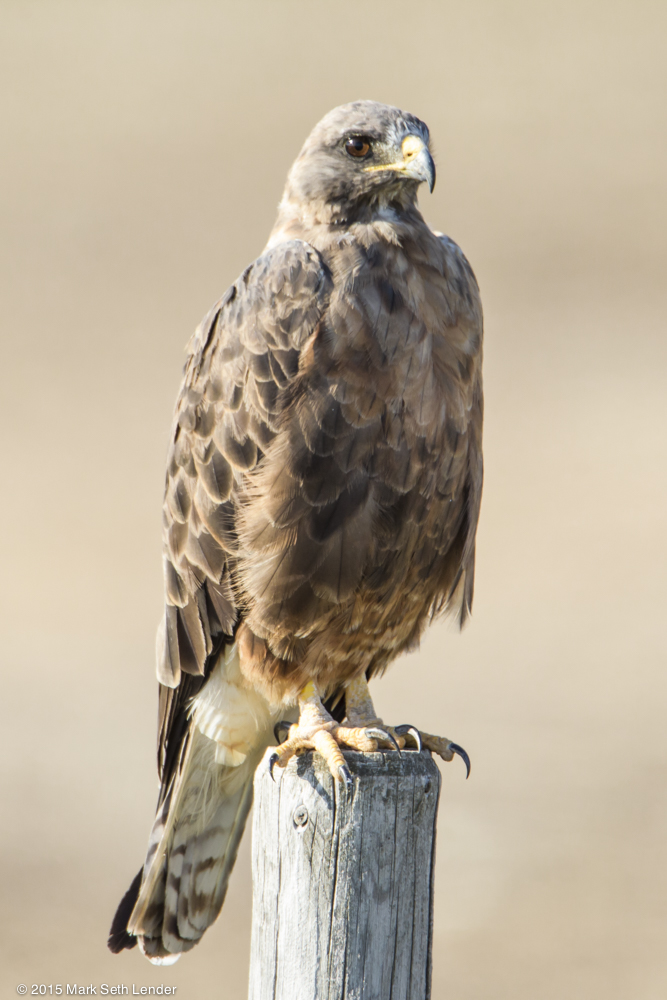 Prairie dog nightmares. And us, our kind, the very worst of them:

The closer I get the faster that guard dog barks, clipped and tight, the tone ascending:

White-tailed doe crosses the road at a run.

– Dog on Guard does not move.

Burrowing owl tucks out of sight.

Big Bison Bull resting on his side, raises his great head, down in the arroyo way down there…

– Dog on Guard stands firm, until the last dog is safely underground all over Prairie Dog Town.

Red moon rising on the red prairie, full as a rising prairie sun. When day comes it all begins again: Dog on Guard. Just like the day before (and the day before that) if he survives the night.