Gentoo Penguins Returning to their Nests from the Sea

I saw my first penguins in the Falklands and for the penguins, or at least some of them, that first was mutual. I was their first human being. Watching each other, we had effects on each other’s behavior.

Initially, when a penguin approached, I tried to get out of
the way. This resulted in penguin panic, ending in a wide arc to get away from me. Eventually I realized that they approached out of interest. Trying to accommodate I bent low.

Crouching provoked a frisson of confusion ending in the same urgent exit.

I eventually worked out the desired response: Stand Still. And the penguins stood still also studying me, for a long time. This behavior obtained across different species but most notably the Gentoo and the King Penguins 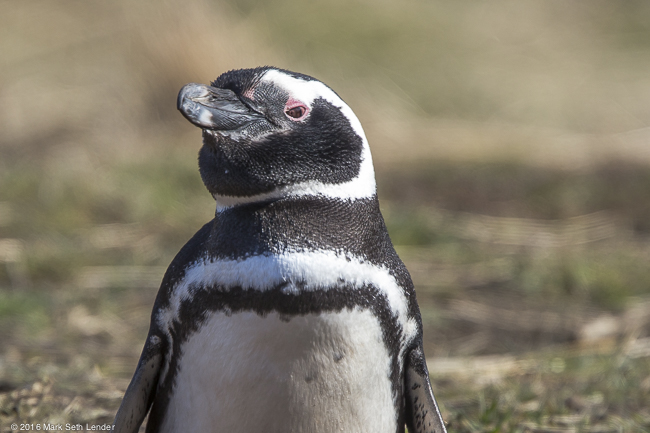 Magellanic Penguin Posing for a Close-up in his Burrow

Penguins and humans have gross similarities. Four limbs, bipedal locomotion, upright stance, and the proportions of the parts each to the other. The penguin’s interest may have been rooted in these externals. Certainly, in an encounter involving predation or conflict attention might well go to the equivalent of a threating beak or stiff, batting wings (flippers in the case of another penguin), or worst of all, towards flashing leopard seal teeth. This, just as we would be forced to glance toward a clenched fist and perhaps, a weapon in that fist. 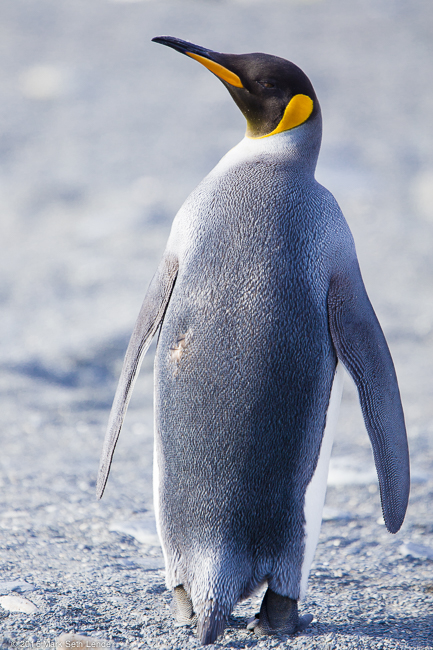 King Penguin Watching the Author over his Shoulder

In the absence of these forcing situations the attractors loose attraction. There was no compelling reason to look anywhere yet, attention went to the face which would indicate that a penguin attaches importance to the its own face, that face being the only point of reference the penguin has go on. If the penguin looks at a human face, preferentially, it is attaching import to the particular “features” that make up the face. Aside from the basic bilateral symmetry shared by all animals with faces, the face is where the eyes are and therefore the place from which a penguin sees the world. And behind the eyes, Awareness. What we have then is one Awareness locating and seeking out another Awareness.

The penguins were practicing what in humans what be called Anthropomorphization. In this case:

These days I find it harder, and harder to kill anything, or eat anything, that has the capacity to look me in the eye. 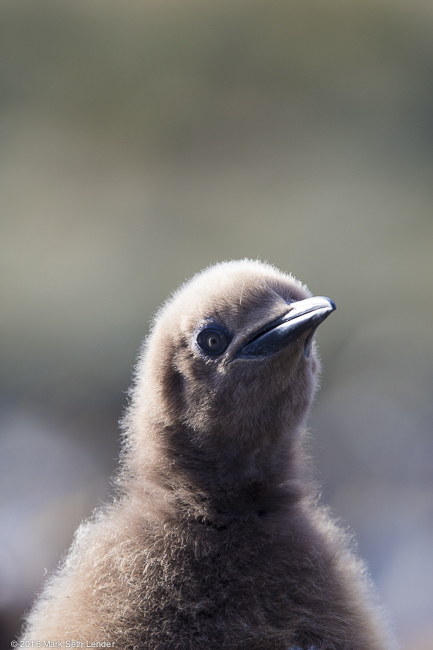 Visiting the Falklands and South Georgia Island
My fieldwork in the Falkland Islands and on South Georgia Island was conducted with the support of One Ocean Expeditions (www.OneOceanExpeditions.com). One Ocean is a particularly good tour company because they made multiple landings, and we were able to spend upwards of 2 hours per landing. This was absolutely essential for wildlife observation, and both wildlife and landscape photography, and for a sense of place. Cruising by on a large boat is hardly the same as setting foot on shore. If you have particular questions, or would like more information about visiting some of the places I’ve been, send me an email: MSL (at) MarkSethLender.com 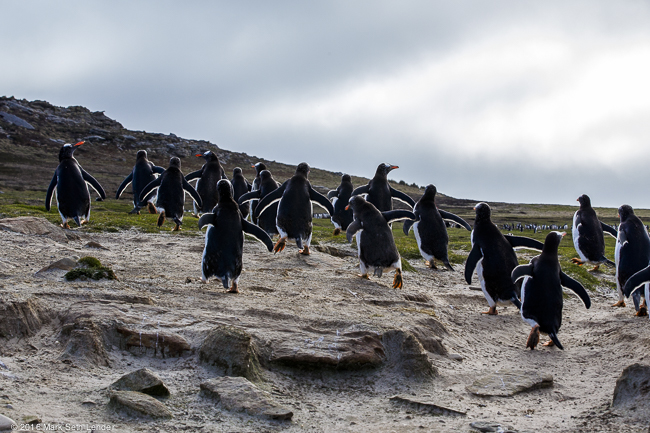