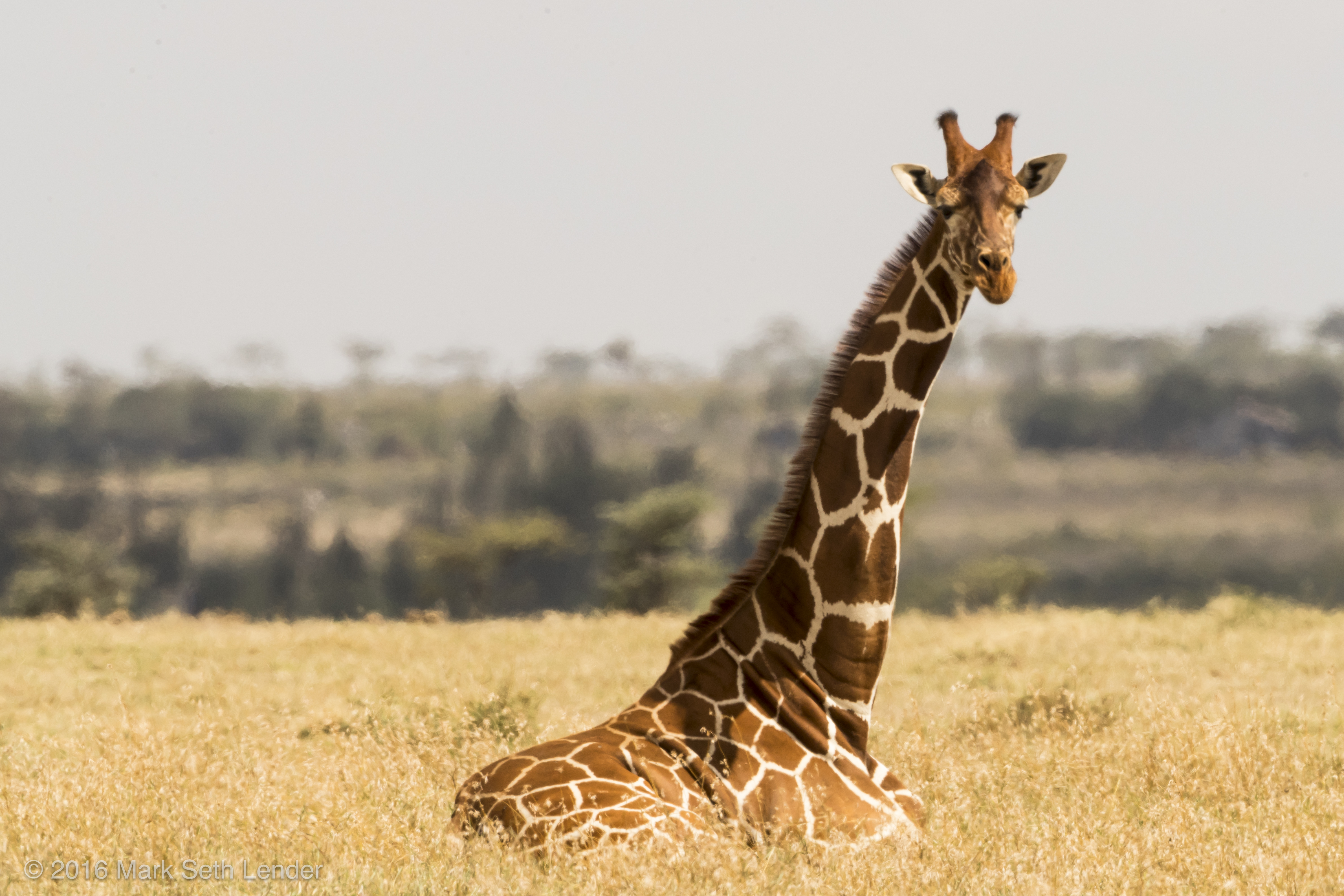 A herd of giraffe consists of a group of adult females and their offspring, or a group of males in a bachelor herds of their own. Individual males are only occasional visitors to the female herds. anti acidity. Although a herd of impala might run to 30 individuals or more, the largest herd of giraffe I’ve ever seen had 11 members with 5 to 7 animals being closer to the norm. There are many reasons for this but one stands out. When acacia trees (the giraffe’s preferred food) are over-grazed they produce toxins in their sap that are distributed by the capillaries into the leaves. Worse, a tree under attack somehow messages the other trees in the vicinity, so that if one acacia in a stand goes “sour” the others will follow suit. Exactly how this is accomplished is not known but giraffe are well aware of it. They nibble only a little, and move on. Obviously, the larger the herd the more impractical this strategy becomes. Too much browsing and palatability will set a limit much before the total number of trees and leaves. Another contribution to small herd size is the long gestation period of giraffe. They just don’t reproduce that fast. Plus, unlike most ungulates, newborn giraffe are slow to gain independence. There is just too much to learn. Namely, how to feed, where and how to drink and when it is safe to do so, and – for the young males – how to compete for females.

Giraffe defend against predators by kicking. You do not want to be kicked by a giraffe. Neither would another giraffe, so keep from killing each other they engage in what is called “Necking,” in which they swing their heads and slam each other with their ossicones, the horn-like structures on their heads. Pushing against each other is another form of competition and applies much the same logic as Necking: Weight wins. 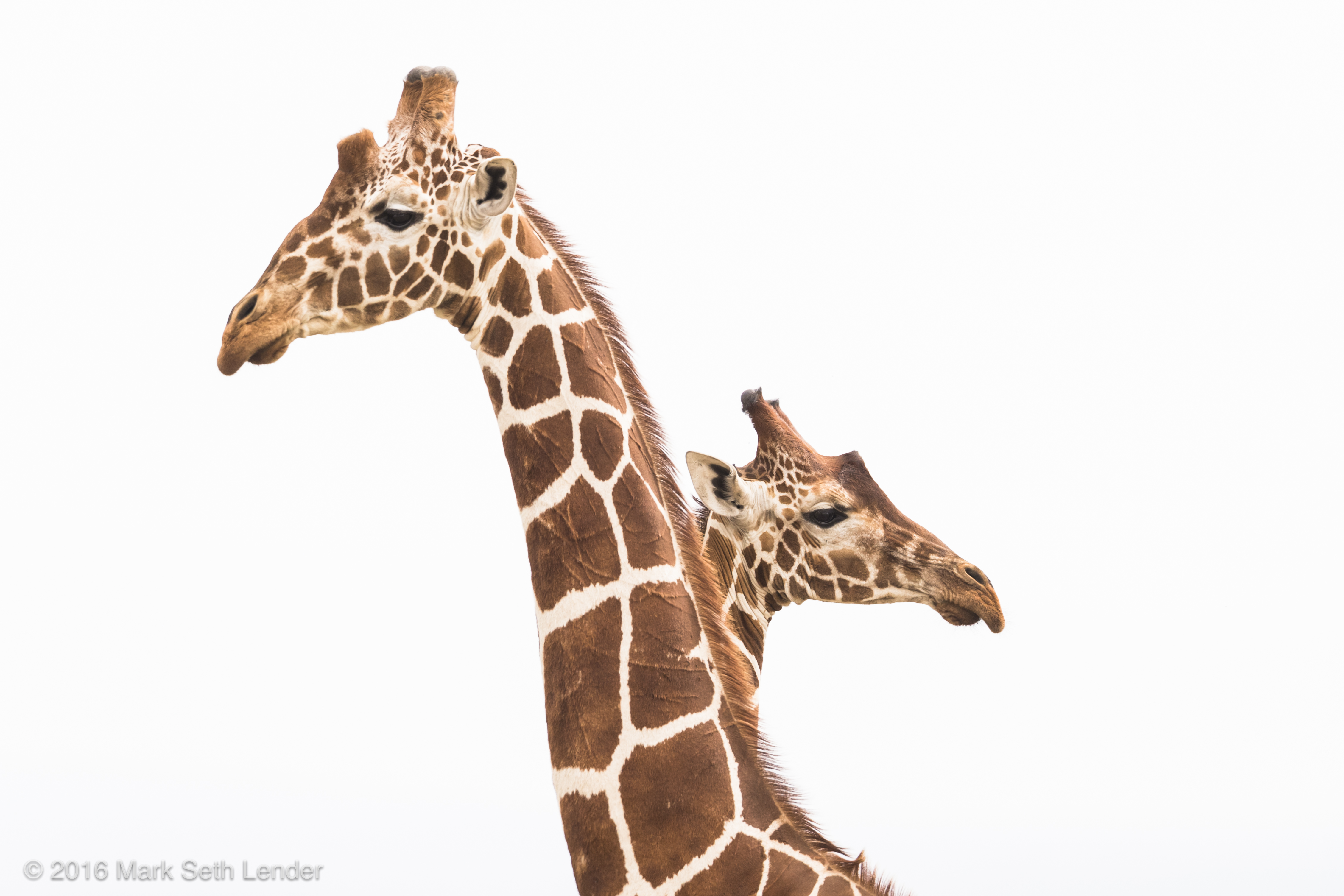 What then to make of the two young giraffe I call Little Man and Elder Brother? The mismatch in size is obvious and therefore, the outcome of any contest a forgone conclusion. Why go through the exercise? The simplest and therefore the most likely interpretation is that this was a Teaching Moment

In the wild, weight and physical size matter almost more than anything. The biggest male lions are the masters of both their prides and the hunting territories those prides control, just as the heaviest elk is the one most likely to prevail in a clash of antlers. In a catfight between cats of different species (cheetah versus lion for example) a cheetah has a stark choice: Run or Die. Some of that is jaw strength, and there is also age and experience to consider; in all, weight is the trump card. Personality of the individual can inflect the outcome, but cannot conquer size.

Elder Brother as well as weighing half again as much as Little Man was also three heads taller, creating a substantive advantage in reach and leverage as well as throw-weight. Little Man not only lacked impact, he could not deliver his blows to the right places, especially when striking across the back of Elder Brother because his neck was not long enough to get there. This was a contest of No Contest. Yet Elder Brother showed great restraint and perseverance. Every move Elder Brother made was repeated many times by Little Man and there was no reason other than a desire to show him “how” for Elder Brother to allow it. He may have had a degree of benefit from what you might call “target practice,” but this alone does not and cannot account for the space and time Elder Brother gave Little Man to try. Elder Brother’s perseverance becomes a de facto transfer of knowledge and experience.

Getting there:
I flew to Kenya on KLM from JFK via Amsterdam to Nairobi. Donald Young Safaris picks its clients up at the airport (which is a huge help). They then either drive you to your destination or you can fly directly from Jomo Kenyatta International Airport. The flights are short, and comparatively cheap, about $250 per person each way. The drive is about four hours to the areas where the company has a large and elegant house (at El Karama) or luxury tents (in the northern Maasai Mara). If you want to see the towns (and I would recommend it at least one way) the drive is worth the trouble. One word of caution, in that it can be a dusty ride and if that is a concern you are probably better off flying. The experience at the end of the road or just off the airstrip as the case may be will be life-changing. A trip of 5 days duration plus a day each way for travel is the minimum I would recommend. In that time, with two game drives a day, you can see an amazing amount of wildlife. All-inclusive, trips are about $850/day plus airfare. Booking well in advance I was able to find a flight with KLM, JFK to Nairobi via Amsterdam, for about $1000 a round-trip. Don’t let the low fare dissuade you, my three favorite airlines by the way are Iceland Air, Norwegian, and KLM.

Donald Young and Newland, Tarlton & Co.
The giraffe in this story live in 15,000 acres of private reserve in Kenya, called El Karama. I was the guest there of Don Young, at Kiota House. Don also served as my host throughout the Maasai Mara. Every place he took me, over the two weeks I spent with him, was replete with wildlife. He freely shared his bottomless knowledge of Africa (people, places, animals) and if that were not enough he is a raconteur of African stories in the grand tradition. Don also has a great crew. Traditional Maasai, they are well-paid and treated with great respect (something that is not always the case in Africa), and their familiarity with terrain and an impeccable eye mean that very little wildlife is missed. They are a pleasure to be around.

If there is only going to be one wildlife expedition in your life, do this one. I cannot recommend it highly enough.

Donald Young’s safari company, Newland & Tarlton, can be reached through their Colorado office at (303) 439-8462, or online at www.NewlandTarltonSafaris.com

Listen to my prose essay, See One Do One Teach One, on Living on Earth at LOE.Org