Field Note:
King penguins are large birds. The adults are almost a meter in height and my guess is that they are somewhat nearsighted, because when they come over to look at you they don’t stop until well inside your comfort zone. They “Penguinamorphise” us at least as much as we Anthropomorphise them.

That nearsightedness is likely a functional choice. It is very difficult to design an eye that sees as well underwater as it does above water. And the majority of the time, penguins are in and under, water. Between breeding cycles they are at sea continuously for at least 4 months, and even when on land to mate and to hatch and rear their chicks, they return to the sea in long shifts to feed. 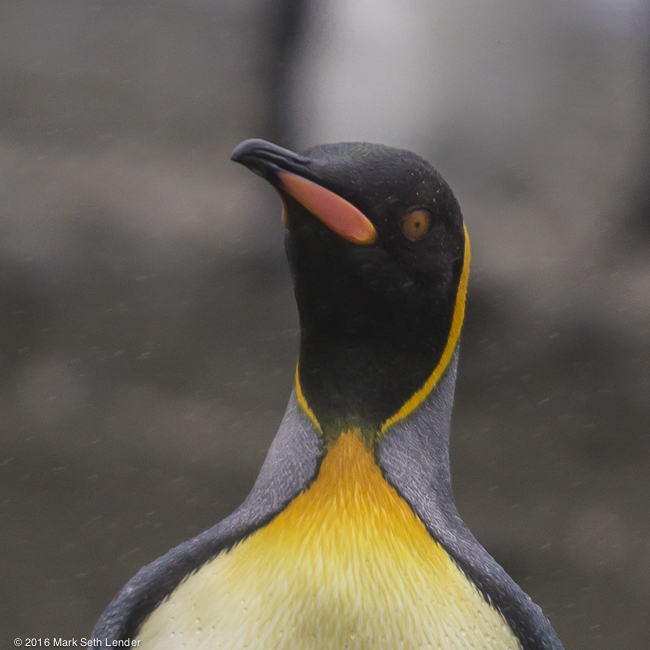 To survive the rigors of total immersion in the Antarctic Ocean at – 3o C (28o F) penguins rely on three things: A heavy layer of fat, plenty of fat-rich food to provide the tremendous number of calories needed for homeostasis, and extremely dense, tough feathers. Those feathers need to be nearly perfect. Shafts must be straight so that individual feathers lay down tight forming an effectively waterproof coat; they must trap just the right amount of air for added insulation; they must be well-oiled and perfectly smooth to minimize drag. Feathers that are frayed and worn cannot accomplish these things and once a year they must be replaced. 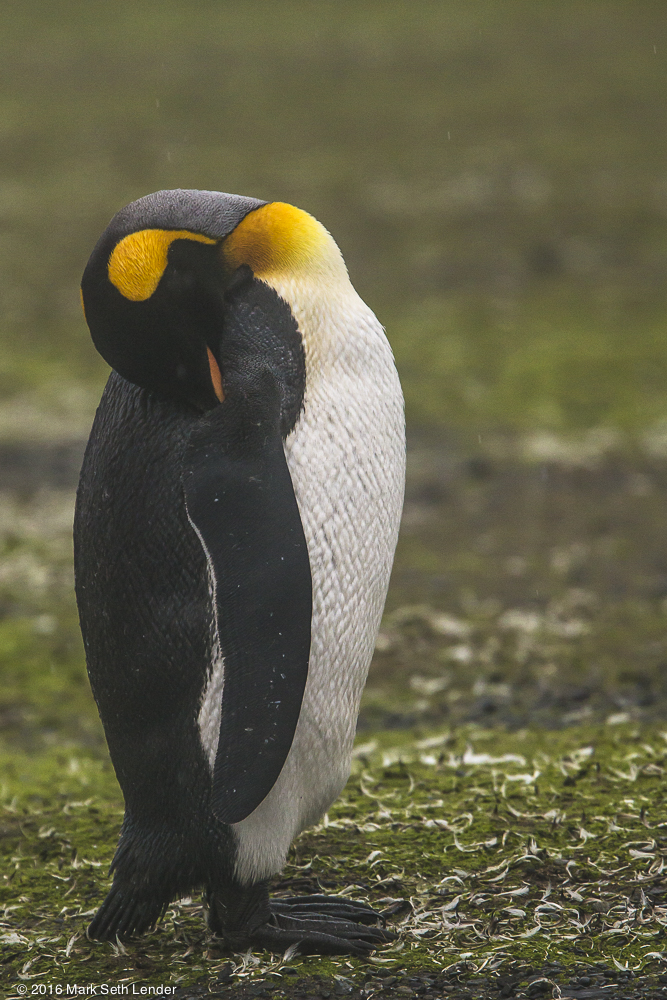 Adult King Penguin at the End of the Molt (Note feathers littering the ground!) 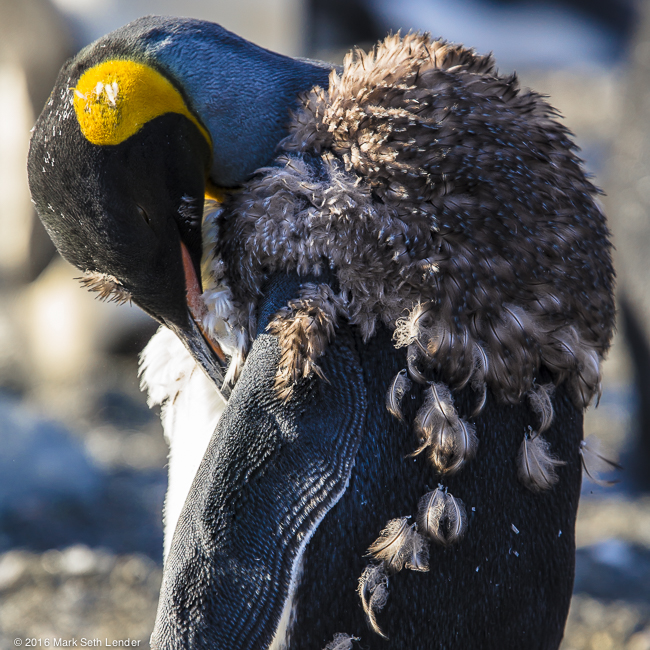 King Penguins undergo a catastrophic molt, which means they loose all their old feathers at once and it takes about a month for the new ones to completely grow back. During that time penguin chicks are not fed because parents cannot enter the water to fish. They would freeze to death if they did. Even once the molt is complete and parents can swim and feed again, they need a significant portion of the calories they consume to restore their own body weight. And the chicks go hungry. 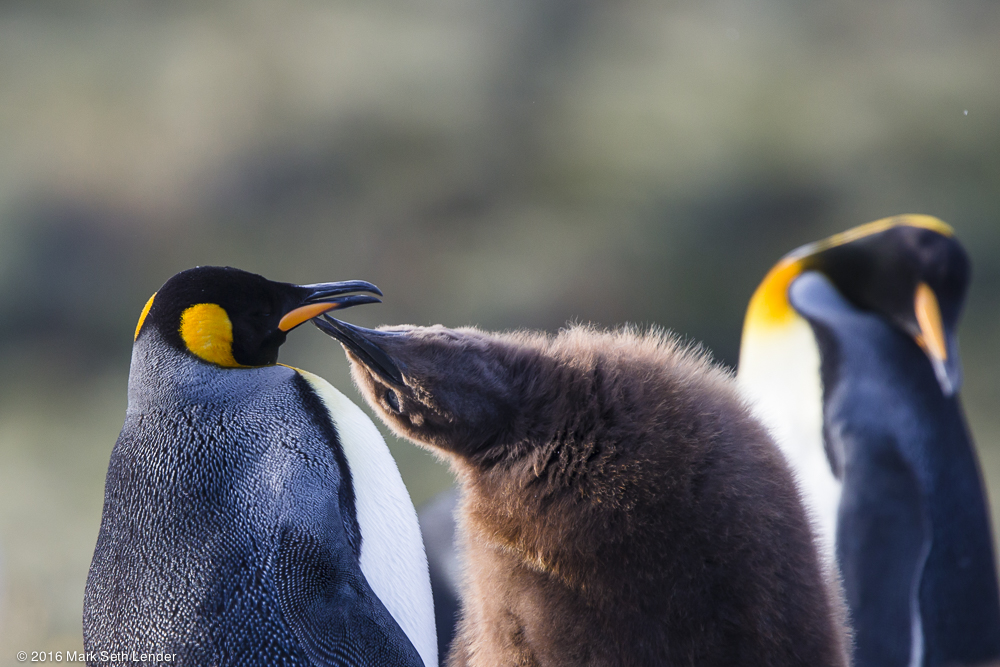 During this time the begging of the chicks is still rewarded but not as often as the chicks would like. When the parents think the chick has had enough – or they themselves have “had enough” – they lean away, or stand tall, and when all else fails they gently tap the young ones on their heads. That we can read and understand these gestures clearly for what they are, is no trivial thing. Maybe the penguins are right to approach us they way they do, and our critique of Penguinomorphisation is misplaced. 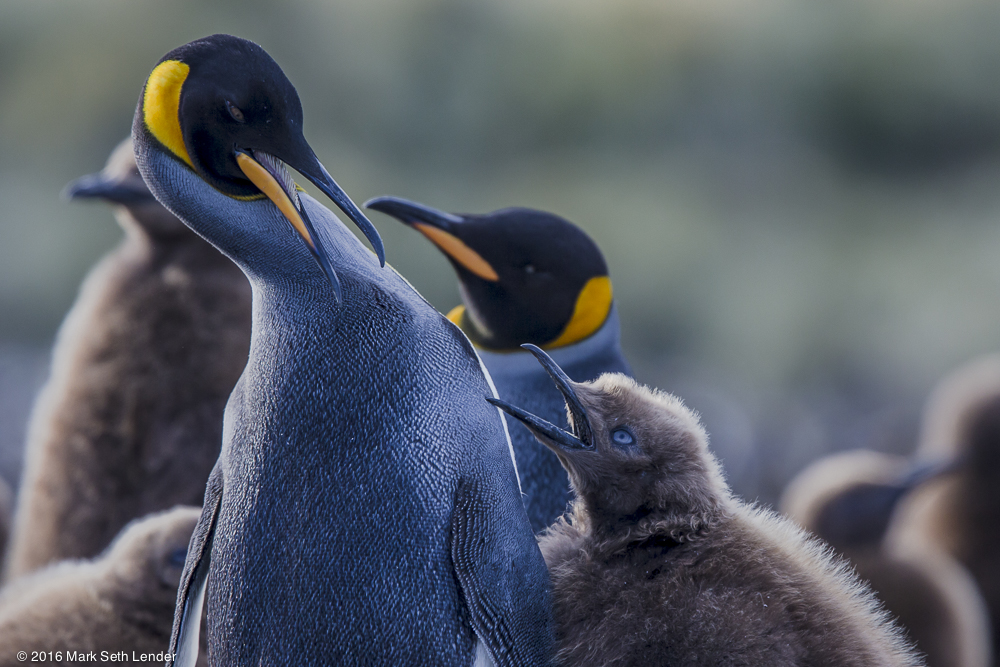 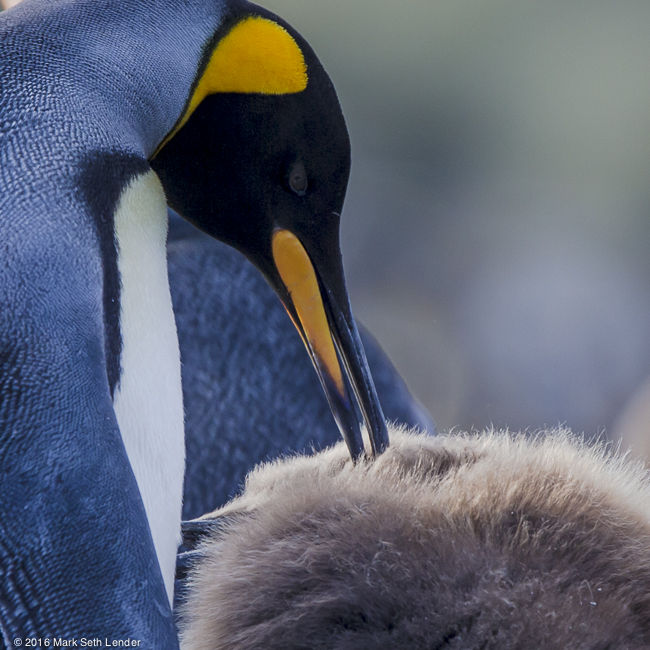 A Head-Tap Gets the Point Across: No more

Some writers complain about penguins, that they have a nasty disposition, that the odor of their colonies is overwhelming. Not true. King Penguin voices are symphonic (especially the whirring calls of the adults which express several dissonant yet melodious tones simultaneously), their demeanor is curious and intelligent, and no colony I’ve ever visited is nearly as bad as a men’s locker room.

This story takes place at Salisbury Plain on South Georgia Island. I made several landfalls on South Georgia from the Akademic Ioffe, a large ice-hulled research vessel, while on tour with One Ocean Expeditions (www.OneOceanExpeditions.com). There were no human footprints anywhere in the Antarctic where we made landing. I saw not a single ship besides our own in 20 days at sea. I am offered all kinds of opportunities for travel these days, and everyone prefaces their offer with “It’s the Trip of Lifetime.” This was. You should go. For advice on when, where, and how to get there, contact me. I’ll be glad to help ()