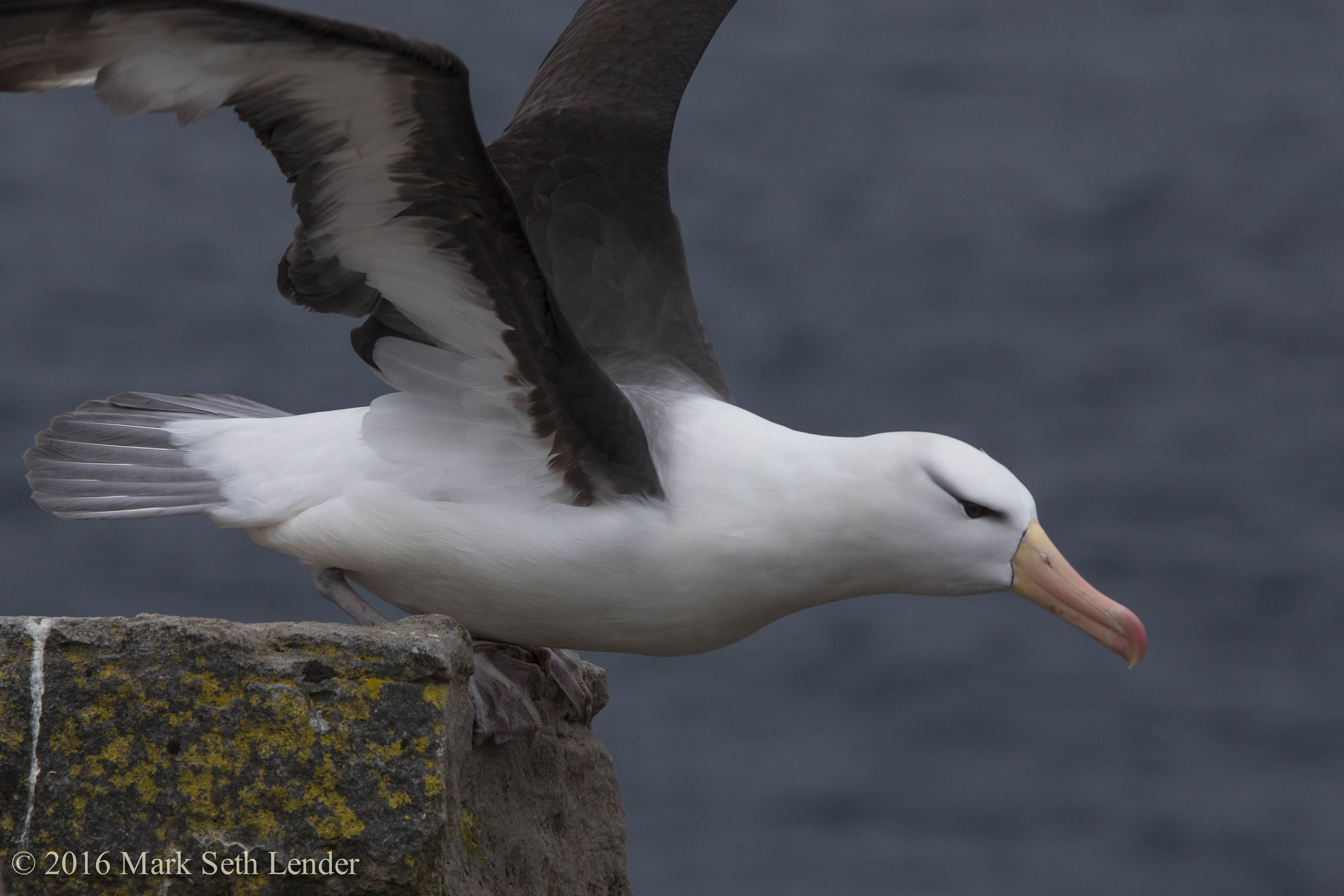 West Point is a small island at the tip of the West Falklands. There, upon the high cliffs that rise like insurmountable steps, and inland among the rolling hills of tussock grass strange bedfellows nest. The cliffs are in the possession of a colony of Black-browed Albatross. No one else can get there. 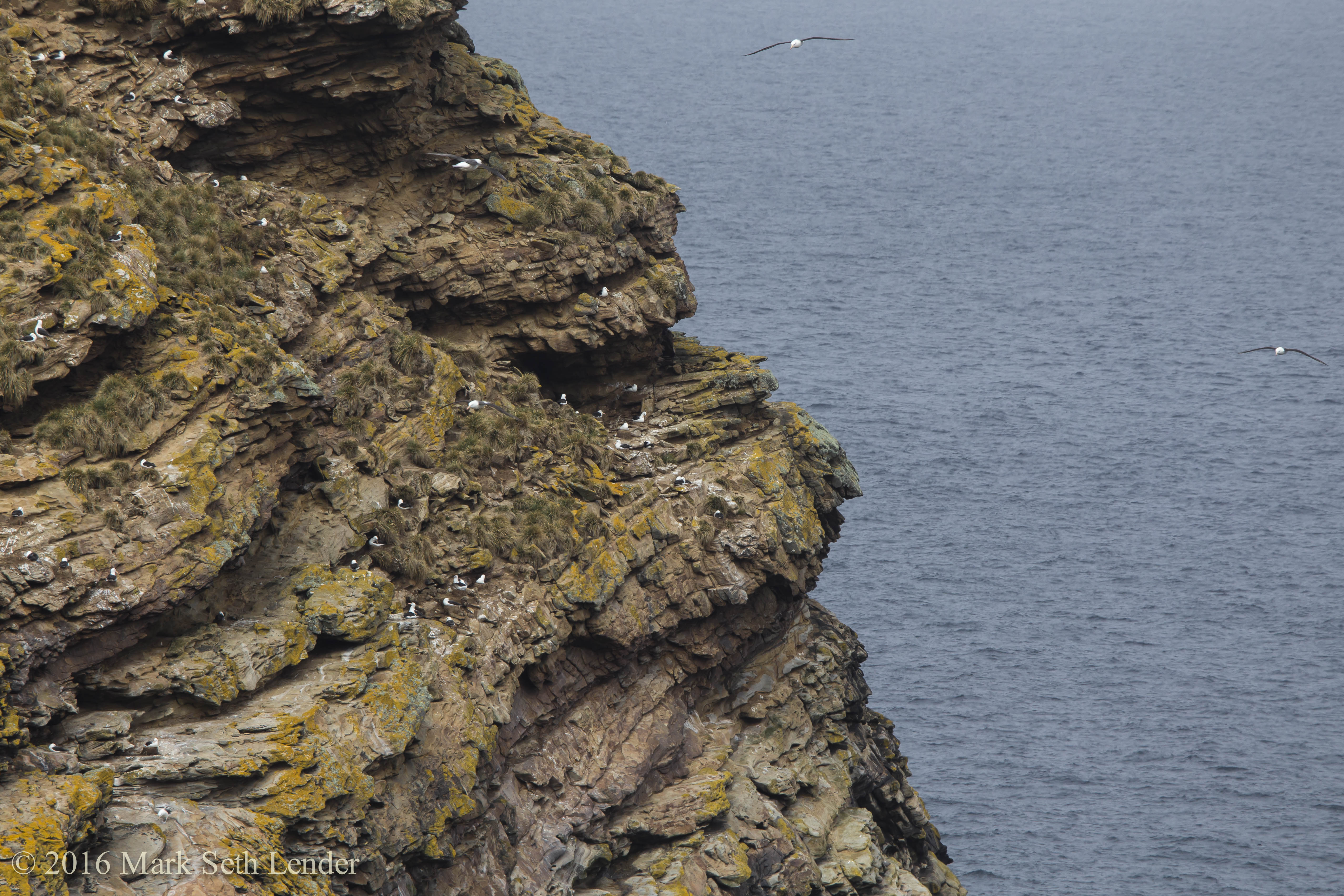 The Place where only Wings will carry

In the tussock grass is where Rockhopper Penguins nest, the slope down to the sea at an angle just low enough that they can just barely, hop and scramble their way up several hundred vertical feet to build their nests and breed, and daily, hop back down again to feed. But wings will take you where feet cannot and in among the penguins pockets of the albatross. Because there is nothing to stop them. 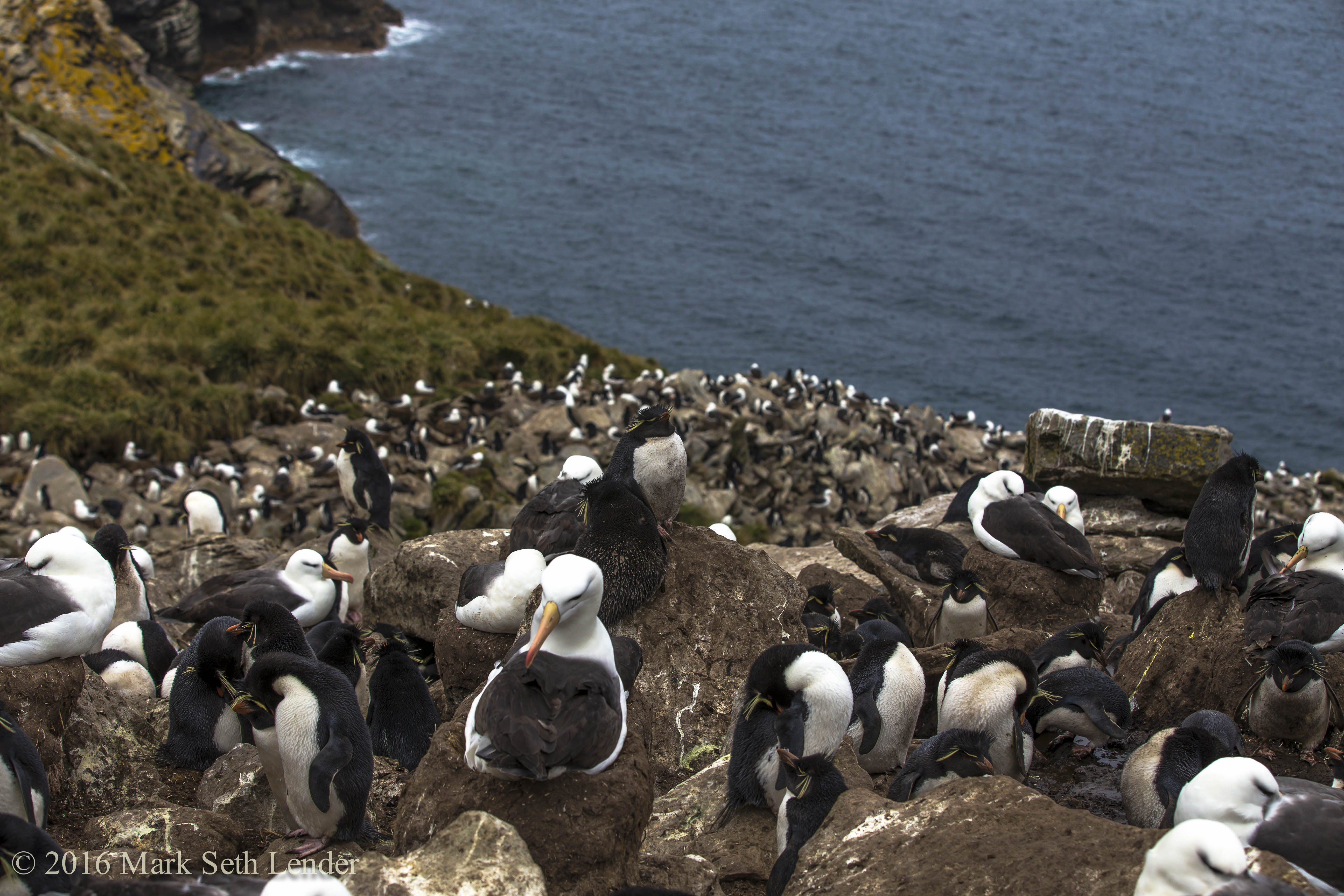 Rockhopper Penguins and Black-browed Albatross on the slope

Neither species much cares for this arrangement. The greatest fliers and the greatest swimmers here argue over space and the mud and straw with which they build their cup-shaped nests. Loudly. Incessantly. They lock bills. 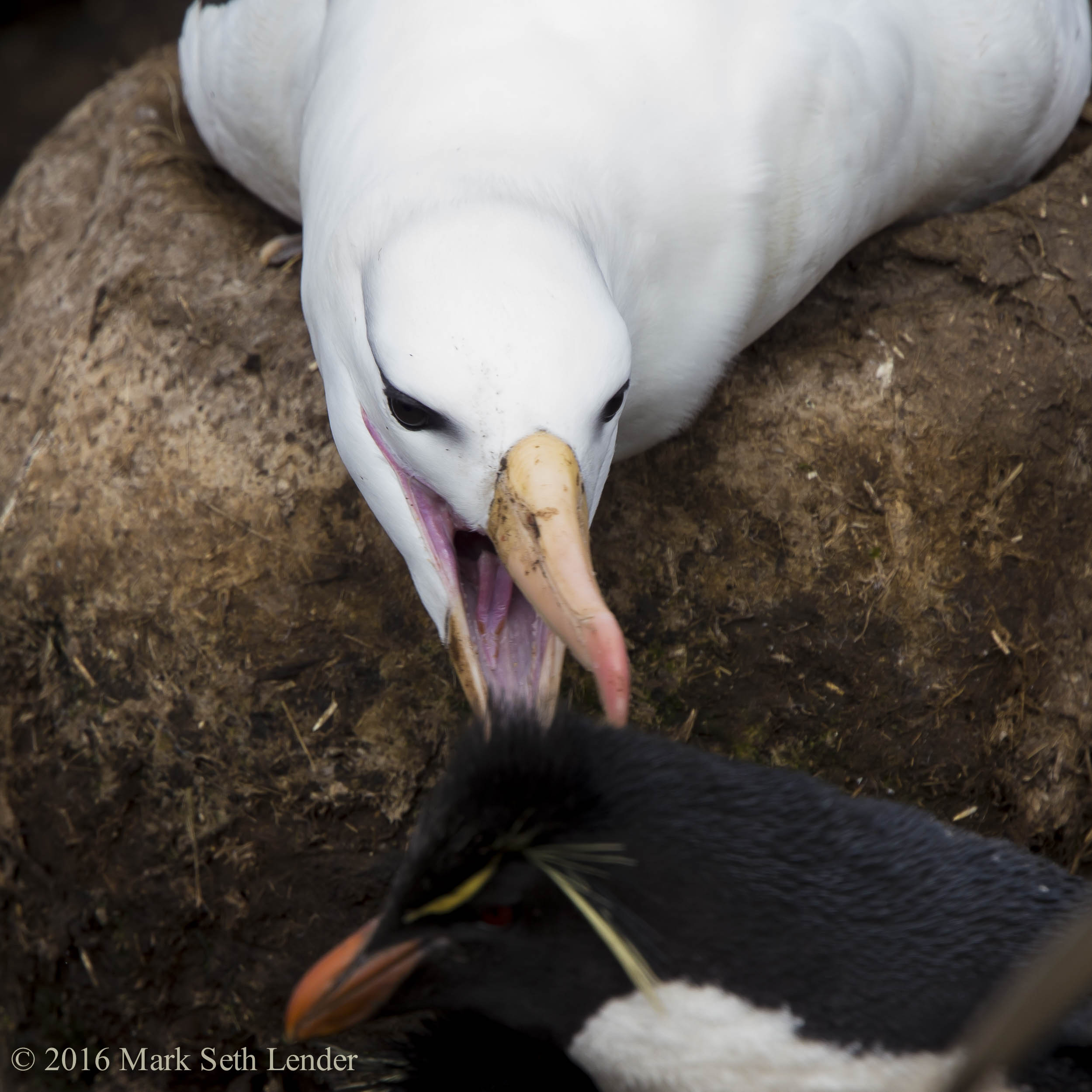 Albatross Arguing with a passing Rockhopper 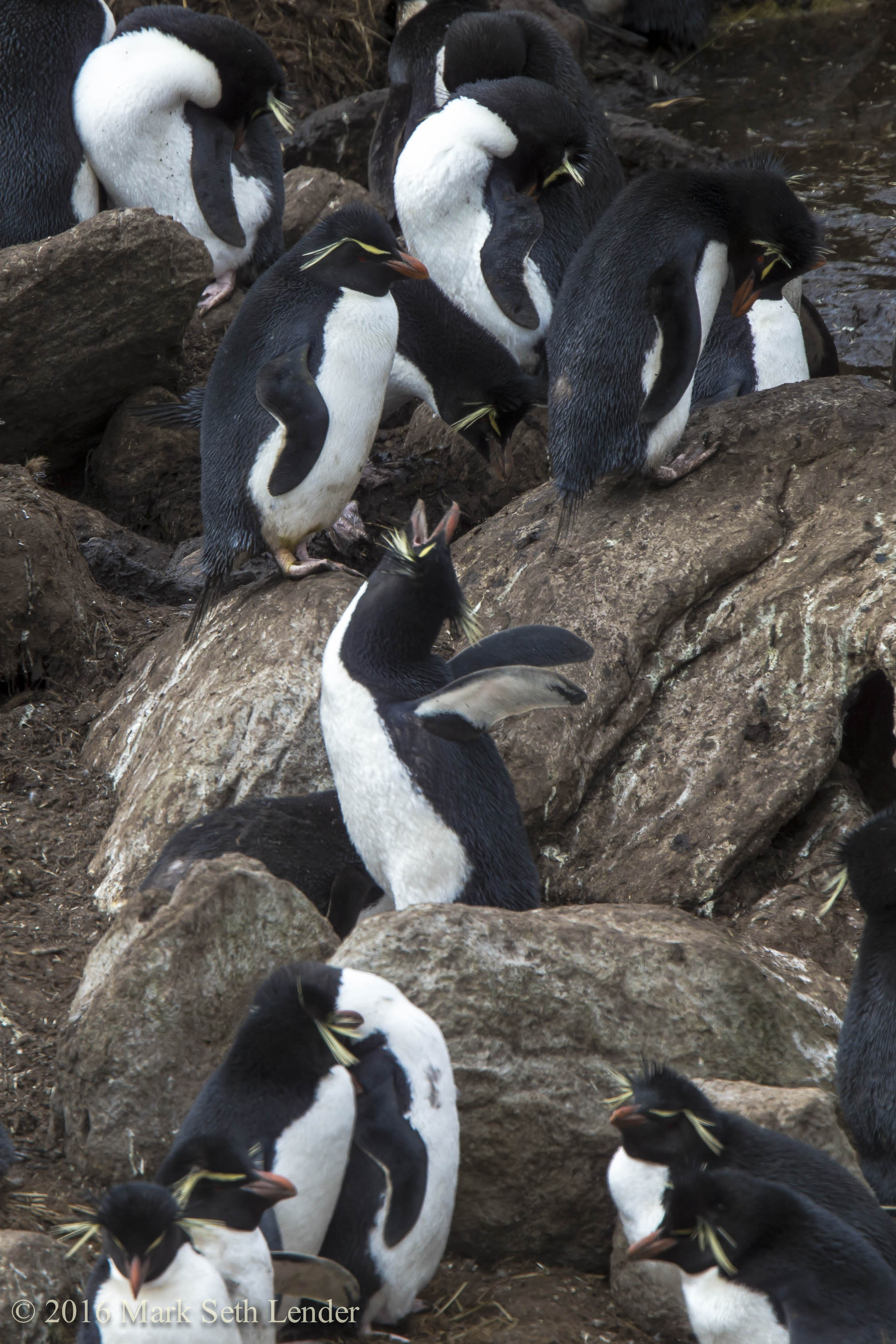 The sense of desperation conveyed is real. Both species are in decline. Fishing nets entangle the great wings of Black-browed Albatross. Fishermen steal the food on which Rockhopper Penguins depend. The climate itself is changing, and this also works against the birds. Faced with an ever warming ocean, the fish are moving south in search of cooler water. And at the base of the food chain, the krill are in serious decline. Many species of penguin depend directly on the krill, but now, so do men. Among others, Norway and Japan are already harvesting krill in quantity, and the Chinese are about to launch the largest krill processing boat in the world, crushing the source of life at its source.

Hard times ahead for everyone. 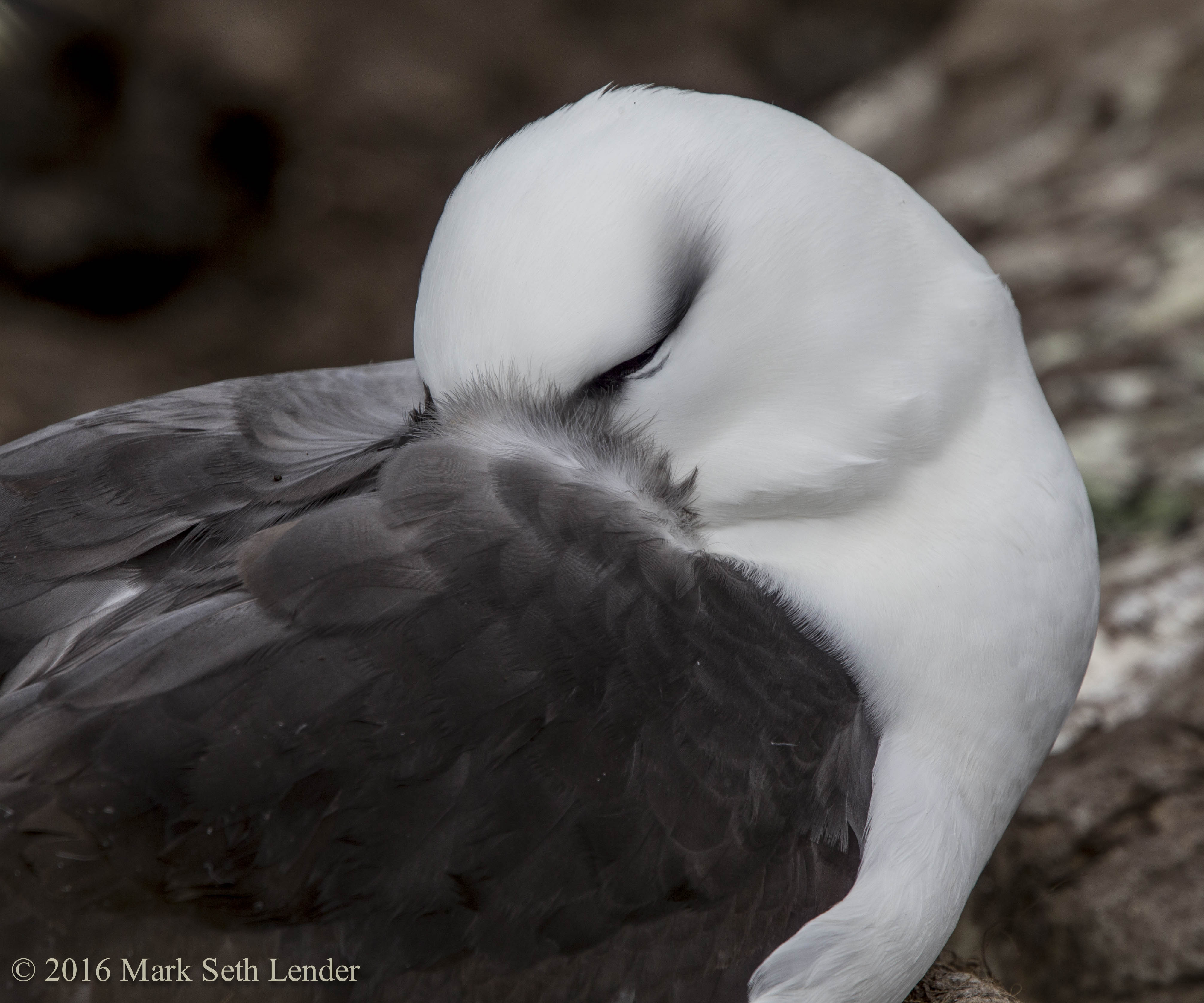 What you can do:

Call, email, write or visit the embassies of the countries with the largest take of krill, namely, Japan, South Korea, China, and Norway (contact information below).   Ask them to please reconsider the harvesting of krill. Go to your local health food store and urge them to stop carrying fish oil products made from krill. While your there, find out who produces krill-based fish oil and call them too. And please let me know how it went, MSL(at)MarkSethLender(dot)com.

Mark Seth Lender’s fieldwork in the Falklands was made possible by One Ocean Expeditions, www.OneOceanExpeditions.com.

The original broadcast of this recording can be heard on Living on Earth: http://loe.org/shows/segments.html?programID=16-P13-00053&segmentID=7  Albatross are the yodeling,laughing cry heard and the beginning and towards the end of the above recoding. The rapid high-pitched calls are Rockhoppers.