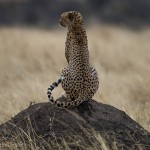 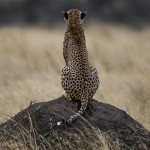 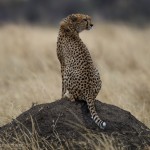 Out in the valley of the Maara, Cheetah is ready to rise. Yawns. Turns over belly up. Tucks her paws, cat-like, against the fuselage of her chest. That tail that is the length of her from hip to shoulder curls, and unwinds. And with the weightless grace of all her kind rolls, onto her paws and strolls in to the evening, that is day to her.

Hidden in the tall grass is a termite mound. She knows the place. Has used it before. Looks back. looks again (to be sure no one is watching) and in her long legged stride, climbs the steep sides and sits, head high, unblinking.

In these flat lands height is mountain and redoubt. Vantage point is safety. Line of sight, command. Seeing first determines who will eat today and who will not and whom among the seen… will be eaten. The crocodile at water’s edge pretending to be stone; leopard dropping from an overhanging limb without a sound; lion stalking close and stealthy on the plain, for each and every one the eye is life or death.

With Cheetah? The eye alone is not enough. Like light itself, Cheetah is a thing of speed! Speed is Cheetah’s second sight. Speed in short bursts is her edge, bright and sharp. Her claws wear, dulled and blunted to the stubby nails of a dog. Her jaws are weak, just wide enough for the small things she can run to ground. With Cheetah the chase is everything.

Cheetah owls her head: One side. The other side. Back again, searching. Nothing found she takes her time, stretches as she climbs down (hind legs and tail in the air, her belly low). Blade thin, she slips into the night like paper through the slot.

At a distance her head appears again, a spotted mask of light and dark, her stare as orange as the afterglow, her eyes unwavering.

The land turns black and white. 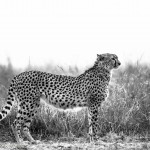 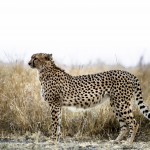 Cheetah is legend. For grace and speed and for beauty. Lithe and light she is lacking in the brute strength of the other great cats. Cheetah has her limits.

Cheetahs can only take small game – what they can both outrun and grab by the throat – and to do that they need a particular set of conditions. First and foremost space, but not just any space. Cheetah needs open space. And open space, thanks to human beings, is – like Cheetah – vanishing.

All around the Maasai Mara the land is being fenced in. Fences mean cattle and cattle are a head-to-head competitor of the worst kind. They take both grass and water from the game and in disproportionate amount – there are few grazing animals more inefficient than a cow, especially the rugged variety of the Maasai. The herders prize their cattle, and though their wrath is generally reserved for lions, they are instinctively wary of the great cats. Cows are wealth to Maasai, not just blood and milk and sometimes meat, but status. Fifty cows will always be better than twenty, one hundred better still. And for those who cannot afford cows there are goats, who chew the grasses right down to the root.

And every day more cattle.

And every day more fences.

Fences do not make good neighbors when Cheetah is your neighbor and that neighbor needs to roam.

Equally deleterious, Maasai are permitted to bring their cattle through the Mara for water during drought. Drought is now most or at least much of the time, and if the herder goes slowly, well, not his fault if the cows nibble along the way. The increasing number of cows, people, and lack of space and especially lack of water leads inevitably to conflict. A small shooting war is burgeoning in Kenya in the Laikipia as herders lash out at people they see as competitors for increasingly sparse resources.

Perhaps Maasai will learn to see their wealth as more broadly based than in cattle alone. But in order for that to happen, other means of wealth (and they do exist in Kenya) will have to be broadly shared.

But ultimately, if any part of the natural world is to survive there will have to be fewer humans.

Including us, including here.

African Wildlife Foundation is one of the premier African-run conservation organizations, whose mission includes local partnerships across Africa in an attempt to find ways that wildlife and people can coexist, each to the benefit of the other. To learn more visit: www.AWF.org

To hear my broadcast of Cat Vanishes, visit Living on Earth.  It’s the last segment in the program:  www.LOE.org