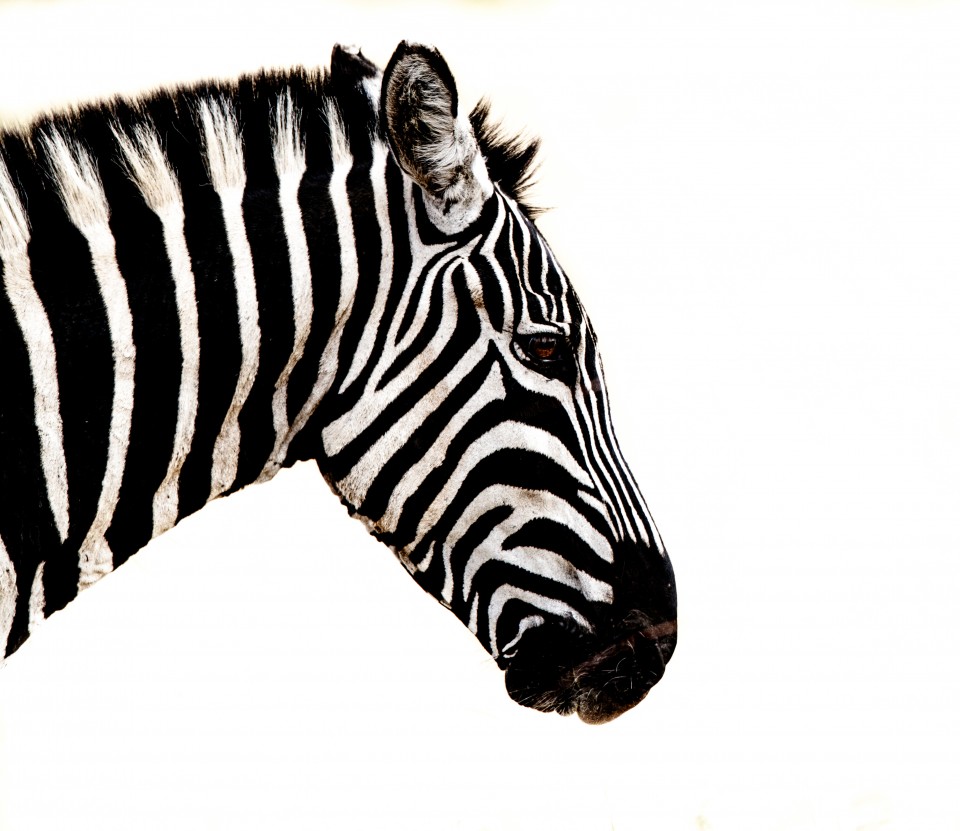 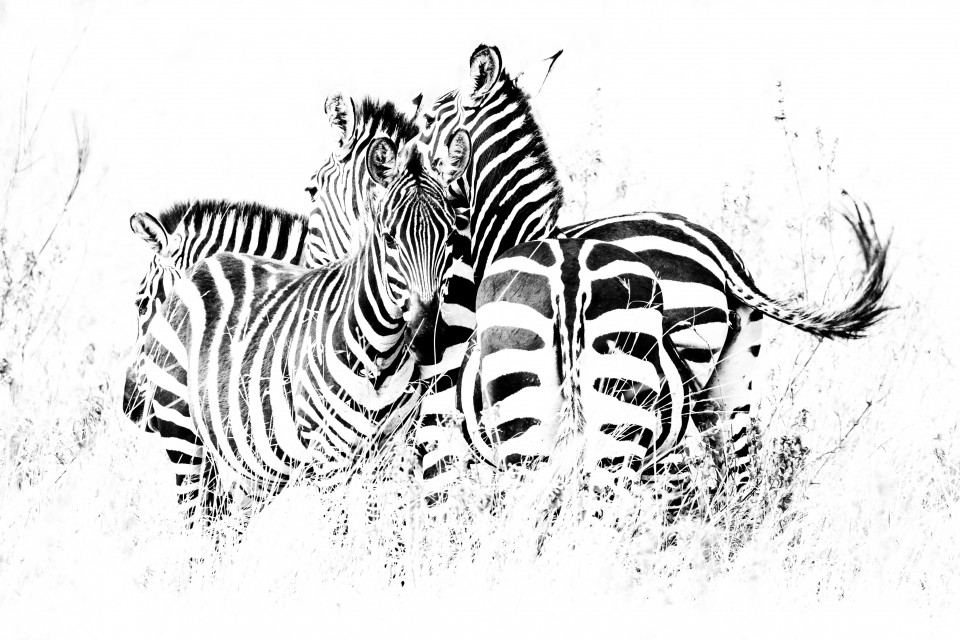 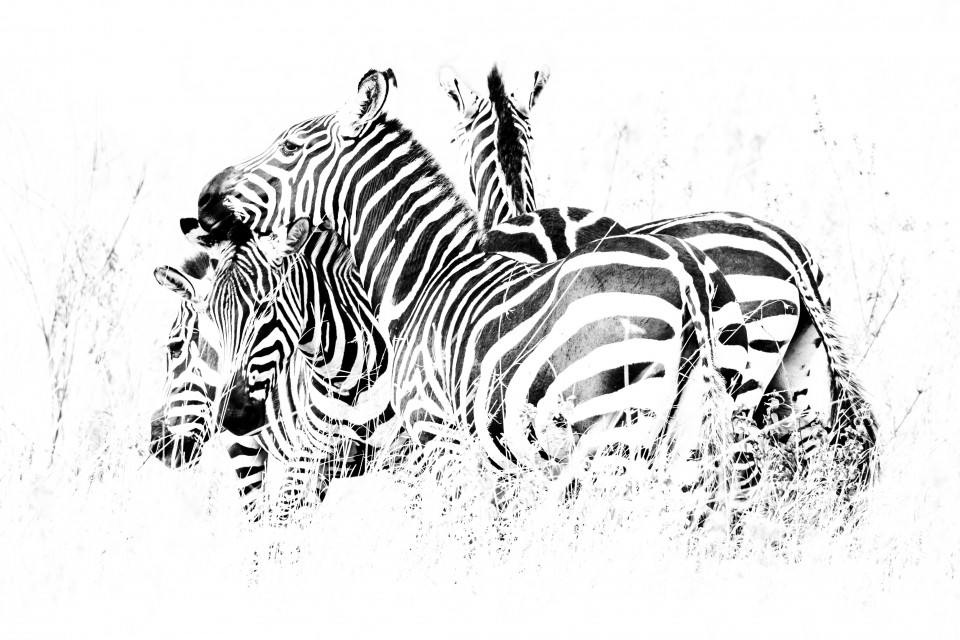 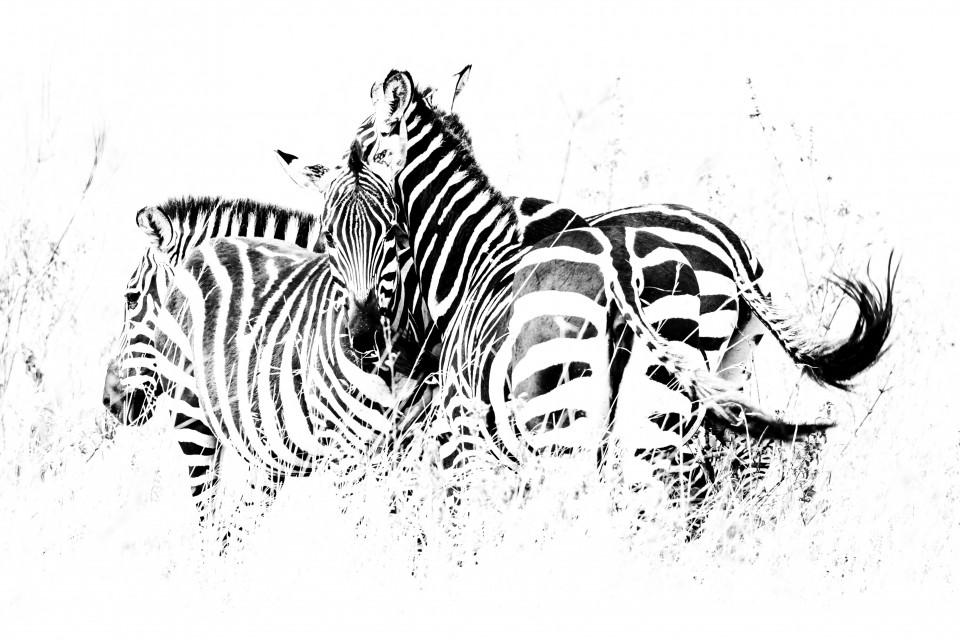 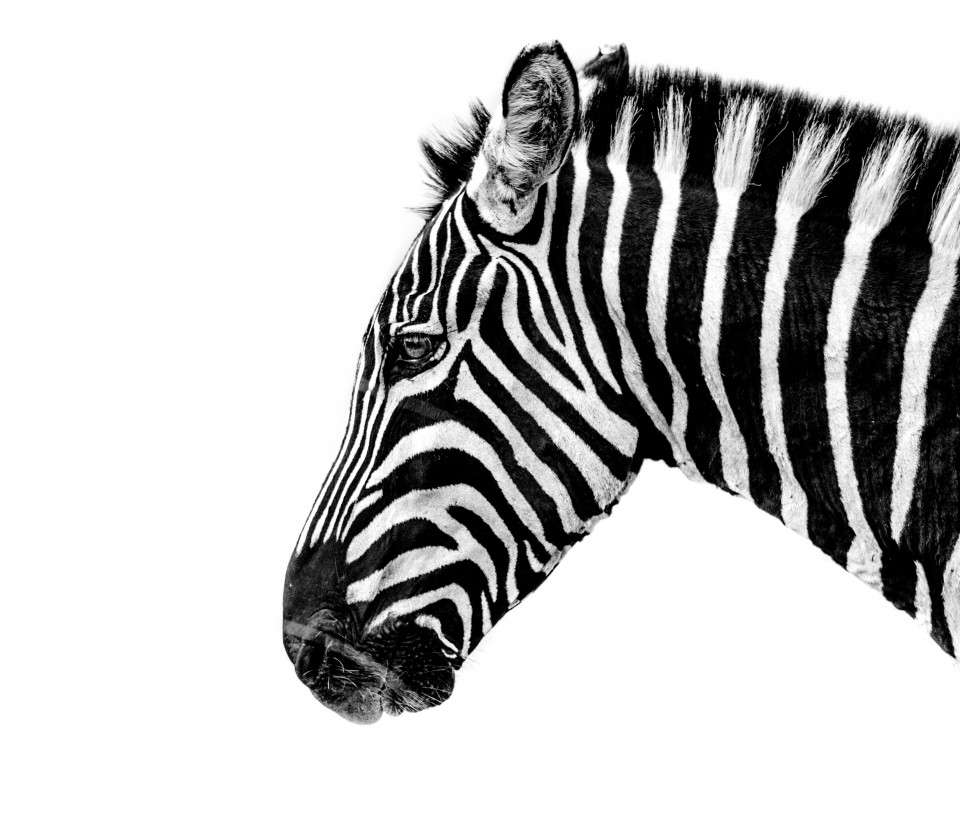 Zebra are making themselves painterly. Spreading out. Milling about. Closing the gap. Becoming a knot a knitting a… Tapestry. Abstract. Abstruse. Neither close nor distant on first glance and are they Herd (Indivisible) or Horse (Invisible)?

That’s the trick of it.

And whether White Horse herd in shadow or a Dark Horse herd in light, even the predators (for whom disambiguation is their only business) struggle to get it right. There are too many decisions to make!

Which is the point of it.

Lioness furrows her brow (did those flashing lines give her a migraine?). Leopard stares and blinks, as if he cannot focus (has he had too little sleep?).

Jackal packs it in.

Wild Dogs loll their tongues and sit down on their haunches (they have to have a think).

White-backed Vultures (theyknow what it’s all about) repeat their mantra silently: circle, circle, wait… wait…  While spotted hyena (being opportunists) will let the Nile crocodiles first sort it all out.

Well, Zebra did not have to go to finishing school to learn that living is an art, that one alone is decoration and strength in numbers is the only way to save your hide. It is not wisdom, just a fact of nature there is great danger all by yourself. Those are the breaks. There’s little bending.

Going it Alone and Lonely never wrote a Happy Ending.

[To hear Mark’s broadcast of this story on Living on Earth, click here: Dazzle-Dazzle. ] 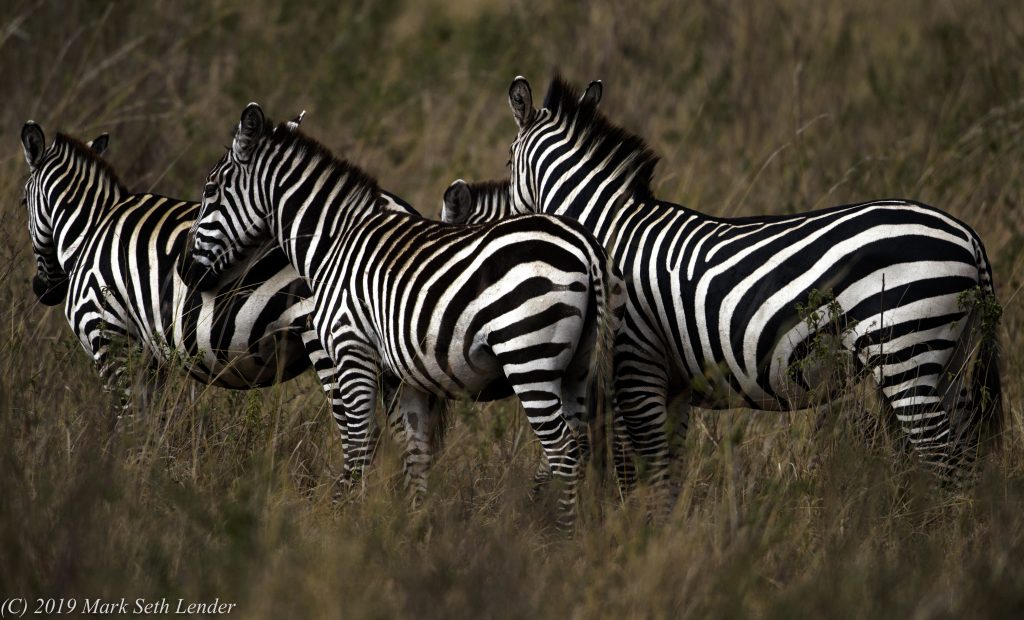 Zebra and wildebeest often herd together. Two reasons are given for the admixture. First, that zebra supposedly prefer to eat tall grasses and wildebeest the shorter species meaning they do not compete for forage. However, I have the photographic evidence to the contrary, wildebeest bending low to graze, then raising their heads to chew and what they are chewing? A mouthful of tall grasses.

It is also believed that zebra have more acute eyesight and wildebeest have a more acute sense of hearing, the zebra therefore being the first to see a predator coming, wildebeest more likely to hear them and in addition capable of recognizing the sound of the predator per se and also the distant alarm calls of other species signaling a predator’s approach. Important and complementary differences. Is any of this sufficient?  Probably not.

Now invert the proposition. What does a predator see: Many grazing animals in two convenient sizes, intent on grazing. Tempting. But also, a moving mass of stripes in at least five distinct tonalities (two for zebra, three for blue wildebeest). To human eyes, even when frozen in place in a photograph, the black and white of zebra, close together, even in small groups disguises how many individuals occupy the frame. Or even which way they are facing which is important because it is almost obligatory for predators to attack from behind. The blue wildebeest of the Maasai Mara with their curtains of shaggy hair laid out in dark brown, light brown, and bluish gray stripes accomplish essentially the same thing as a zebras black and white. Thus, zebra and wildebeest each create their own Razzle-Dazzle of confusion. Confusion causes delay. It takes a moment for the brain to resolve it. And delay can be a life and death difference if you are a zebra of wildebeest trying to get away.

I use the term “Razzle-Dazzle” advisedly. During the First World War, ships were painted in broad zigzagging stripes of different width and color. This was before radar and it made it difficult for spotters to estimate range. Maybe that is also happening here. How does a predator interpret the even more complex field of wildebeest and zebra together, their many tonalities and colors all milling about? Can that predator tell, how many, where they are facing, how far away they are, simultaneously?   All three data points are critical.  “Can I pick out one individual as I must? Can I execute my attack from behind, as is my preference?  Even at a dead run can I get there in time before my prey sees me coming and will have already run away?”

And could it be, in the mix of density and tones and shades and direction of stripes in wildebeest and zebra together, there is not only confusion but perhaps a complementary confusion. Can one or the other be more effective depending on the quality of light (cloudy or bright) and whether midday or dawn or dusk or night? Just as in their complementary combination of hearing and eyesight, do both species together make a better defense than either one alone?

It has been reported that zebra stripes discourage biting flies which has been posited as the generative cause. Perhaps the same applies to wildebeest and their stripes. True, insect bite may debilitate and can sometimes lead to demise but for an absolute determination of the purpose of stripes you only have to ask, would an ungulate rather be bitten by a fly… or by a lion?