Two Cubs-of-the-Year scrambling after their Mother

Akpatok is a closed island.  Landing is prohibited and approach by boat is restricted to a distance of 500 meters!  I was working from a Zodiac inflatable, which meant I did not have an entirely stable platform, and though I was shooting with a full sensor camera and and a 500 MM lens with a 1.4X extender on it (1.4 X 500 = 700 MM), a lot of it was guesswork.  By which I mean, I could see my targets – in this case the cubs and their mother – but had no idea what they were doing. And I was using the camera hand-held and braced against the gunnel of the boat – near impossible conditions.  Seconds after we sighted the mother and cubs moving down the beach, we spotted a large male polar bear off to the left. 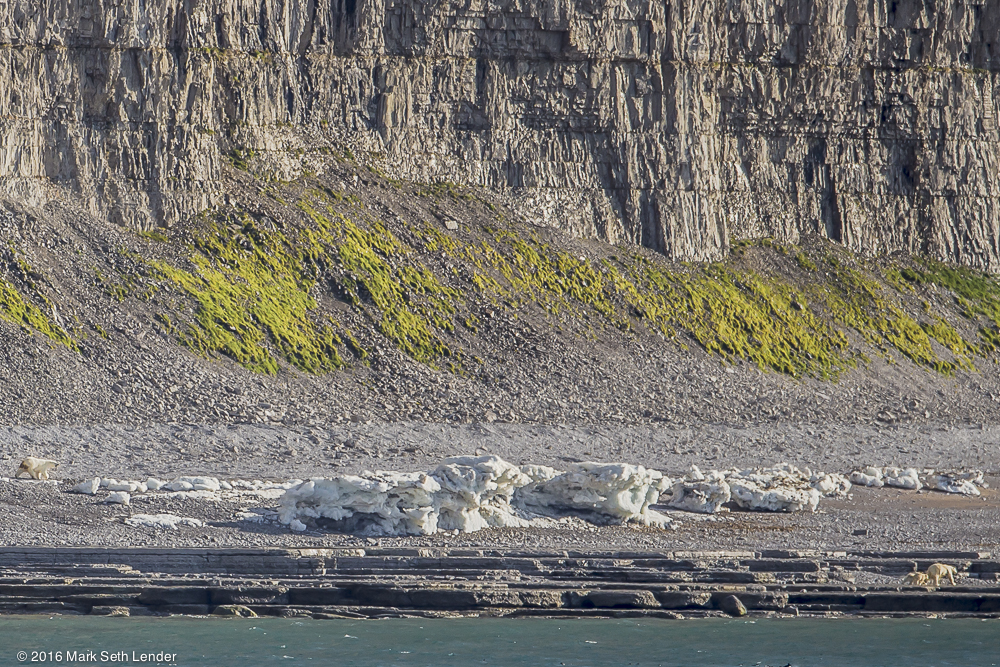 Male Polar Bear ( middle left); Fleeing Female and her Cubs (lower right)
The reasonable assumption was that the female was not anxious to let him get too close, but in the instant, it was just an assumption. After a few minutes, with the pitch and yaw of the boat and the by now considerable distance, we lost sight of the mother and cubs.
Aboard the main ship that evening, I ran through what I’d shot.  Which looked like a lot of nothing. It was not until several weeks later, at home and recovered from the trip, that I was able to revisit these frames. As it turned out, the male polar bear was much closer to the female and her cubs at the onset. She gained on him, then once again lost ground.  Throughout, he was periodically roaring – mouth wide open – for the space of several steps, i.e. striding and roaring.  However, he never left the upper part of the beach just below the cliffs. 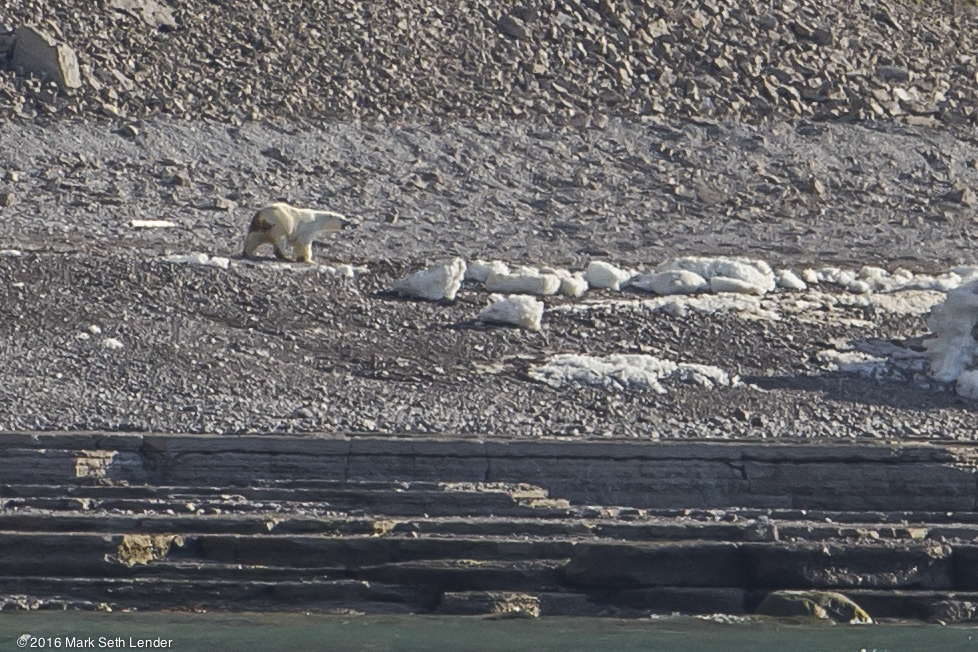 Male Polar Bear Roaring
The female was moving at a good clip, as evidenced by the fact that the cubs were scrambling to keep up with her. Then, rather suddenly, the male was alone on the beach, continuing on his way, and the female and cubs had vanished. 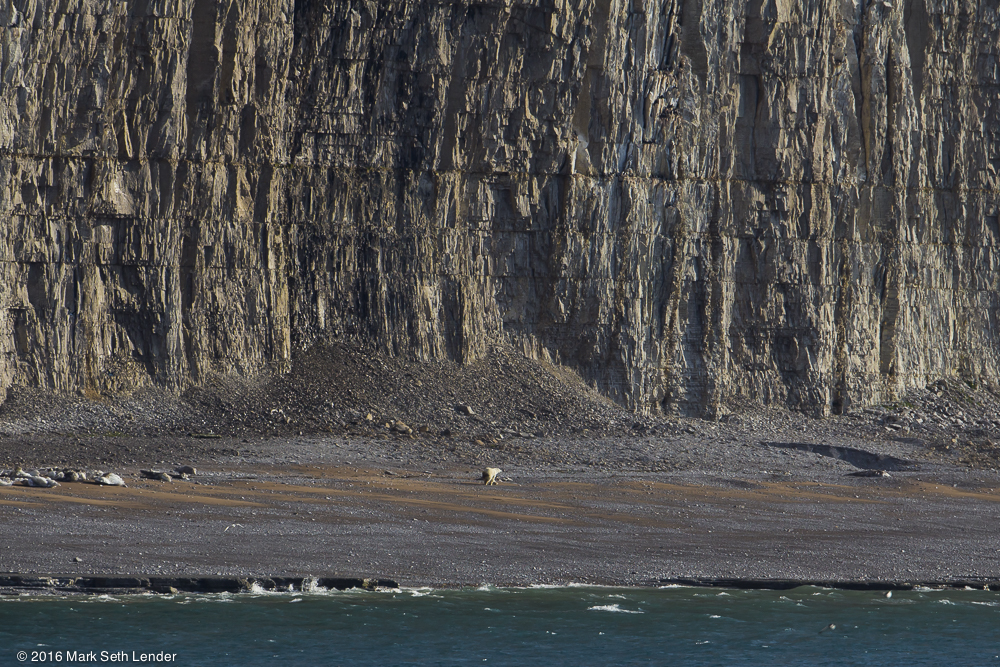 Male Polar Bear Continues on his Way
Eventually, I found the female. When the male polar bear had closed again to about 70 meters the female had plunged into the water. 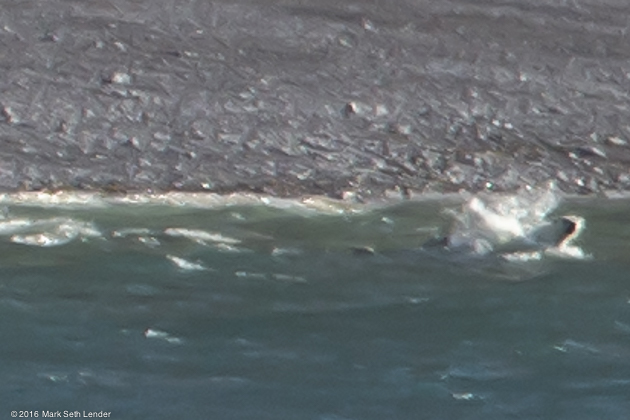 Female Polar Bear Smashes into the Surf
But there was no sign of the cubs.
My cameras shoot at 10 to 14 frames a second.  There is always a certain amount of “blow-by” after the main action is captured and I began to review those frames. This meant searching no more than a few percent of the photo at a time. Pixels are visible at this magnification and I was looking more for light areas than resolvable forms. Whitecaps on the water added to the confusion.
Finally, I found the cubs, not far from where the female made her plunge: one head, then two, swimming the wrong way.  There they were going with the current instead of against it, back towards the male. Multiplying the speed of the waves breaking on shore by the frame rate of the camera I was able to come up an estimate for the speed of the current:  better than 8 knots.
Now, the female had a choice to make. Continue on her way, or go back for her cubs?
Bear-on-bear combat is no different that bar handed combat between humans. Throw weight trumps agility. This is why boxers are restricted to their own weight class. If it came to actual physical contact the female would have been injured or killed outright.  This was why she was fleeing in the first place:  But, she went back for them. 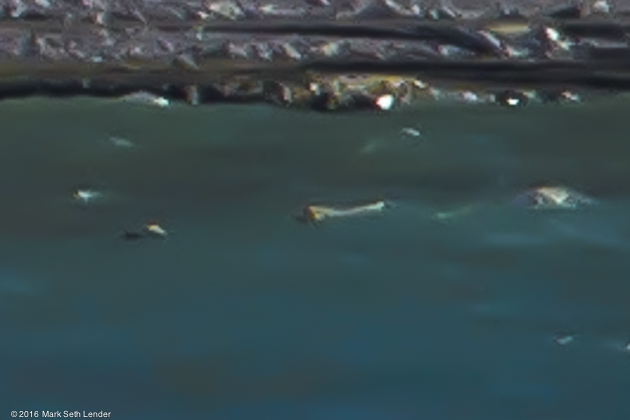 Female (center right) Swimming Toward Cubs (two light areas parallel to her) [Note: The small black dots are the female’s nose and eyes thus indicating her direction]
Somehow she communicated to the cubs that they needed to turn around. In an instant they did an about face. She turned also, the cubs following her against the current, presumably toward safety. 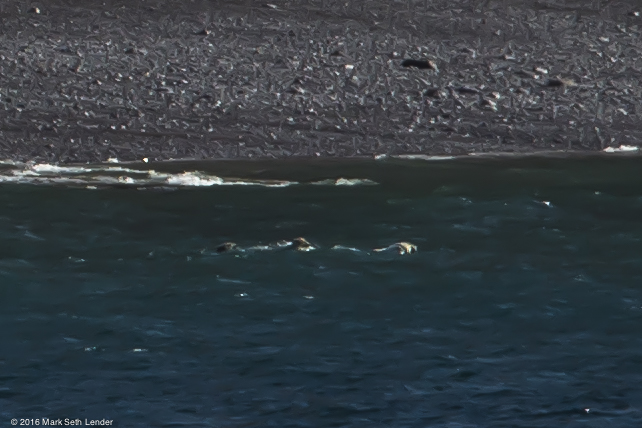 Cubs Following Their Mother
The camera lost sight of them after that, and as we saw, the male simply continued on his way never having descended toward the water.  But at their closest, the female and her cubs could not have been more than 20 meters from the male bear.
It could be that all that big male bear wanted was for the female and her cubs to take their competition elsewhere. As one often sees in the summer, his hind quarters were stained – bear diarrhea – the result of too much protein and not enough fat. Summer is a meager time for bears and they are mostly living on reserves and luck.  Akpatok is a (major) thick-billed murre nesting colony and he may have been catching birds, and the occasional egg. There is also the possibility of carrion washing ashore. When Inuit hunt beluga whales they strip only the fat and leave the what whalers called the “kreng” – a derogatory term for carcass – which is the bulk of the whale. It is a hugely wasteful practice occasioned, as one of my Inuit informants told me, by mercury in the meat. However, the toxic levels of PCB in the fat they ignore. The fat “tastes just like coconut.”  And as to the steady decline of the whales? As another informant told me with considerable annoyance, “There are plenty of whales.” The idea that this can continue is nonsense. The idea that half a ton of polar bear can survive in an ice-free arctic on birds and eggs and carcasses is at best, wishful thinking. It is fat bears need to survive the cold; fat that provides the reserves required for female polar beats to nurse their young; fat and a great deal of it that polar bears need in order to continue being polar bears.
But what you have is what you defend, and the male would have been unlikely to want to share the little he had. Hence, at least one motive for the chase.
That said, this was in July. The male bear may not have closed on the female and cubs because he wasn’t up to it. The Arctic in July is not Miami but it’s comparatively warm and the males great bulk may have prevented him from going any faster without exceeding the limits of his thermal regulation. A meal of bear cub is not outside the behavioral limits of a male polar bear though in the past, the primary motive in such cases was likely to force the female to breed again. Given current conditions, hunger might play a more significant role relative to sex, but a nursing polar bear is a determined and ferocious creature. Above all, it was that female bear doing a thing we expect from the best part of ourselves, that saved them.
My prose essays, including the one on this encounter, are broadcast nationally on Public Radio International’s Living on Earth.
CREDITS:  My visit to Akpatok was made possible by the generous support of Adventure Canada www.AdventureCanada.com. Special thanks are due to Mather James Swan, who made every effort to get me the best vantage for my photos and the acquisition of this story.
Share this