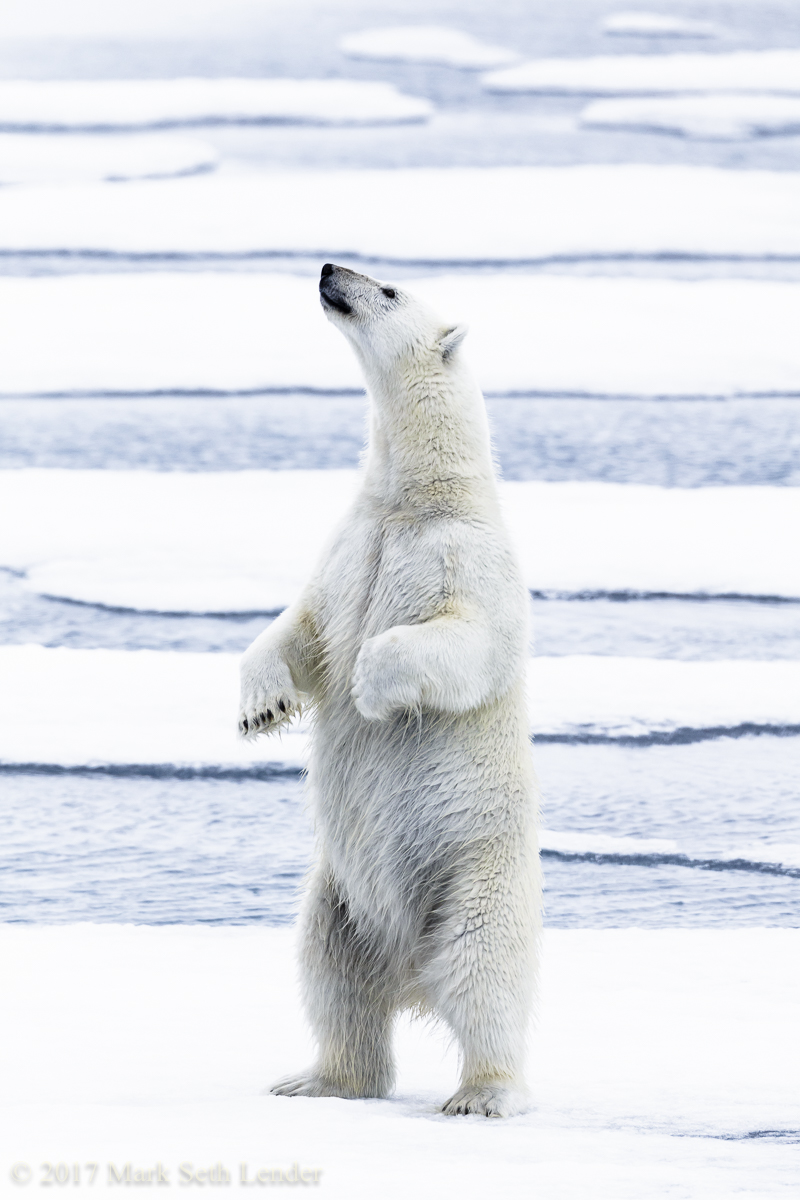 At the edge of the Polar Ice seals and polar bears find their intersection. The seals are there to bear young. The bears are there to feed. I came to watch the show, above Svalbard, 571 miles from the North Pole .
I spotted Standing Bear lying down, flat out on her belly, as much of her body in contact with the ice as she could manage. Bears do that when overheated, or after over-eating. In this case both. One of those seal/bear convergences had recently taken place.

Resulting in one very well-fed, somewhat overheated sleepy polar bear. And in that the key to my encounter. For a hungry bear everything is business (and there were plenty of all-business bears that day). But Standing Bear had the luxury of all her basic needs well and fully met and as with people, it gave her license for higher order pursuits. Namely, curiosity. 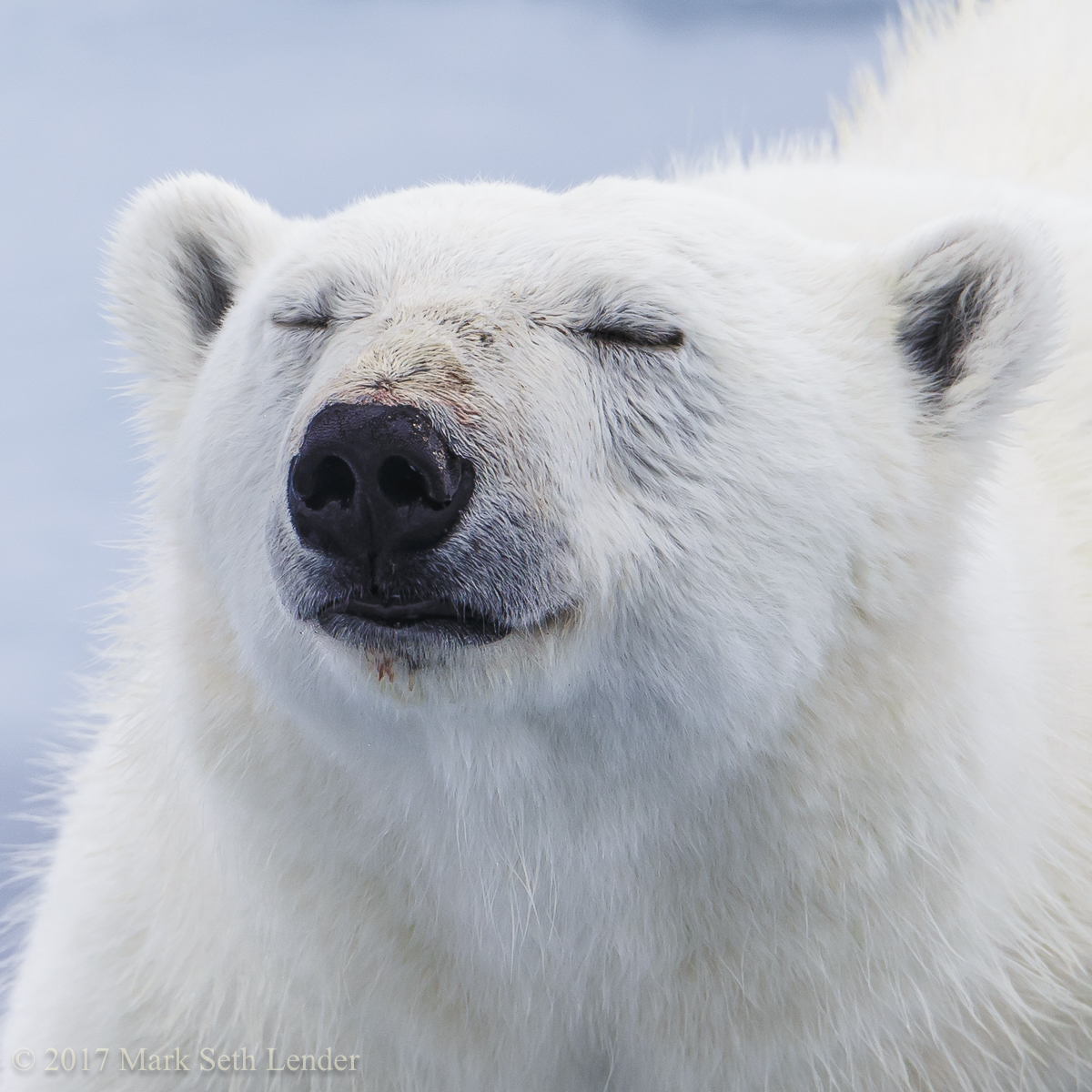 There was still a trace of red on her chin and above her nose. She yawned and showed her teeth and her purple tongue. We were still a kilometer away and she looked briefly, then dozed off again. Clearly, the ship did not interest her. Something she had seen before. 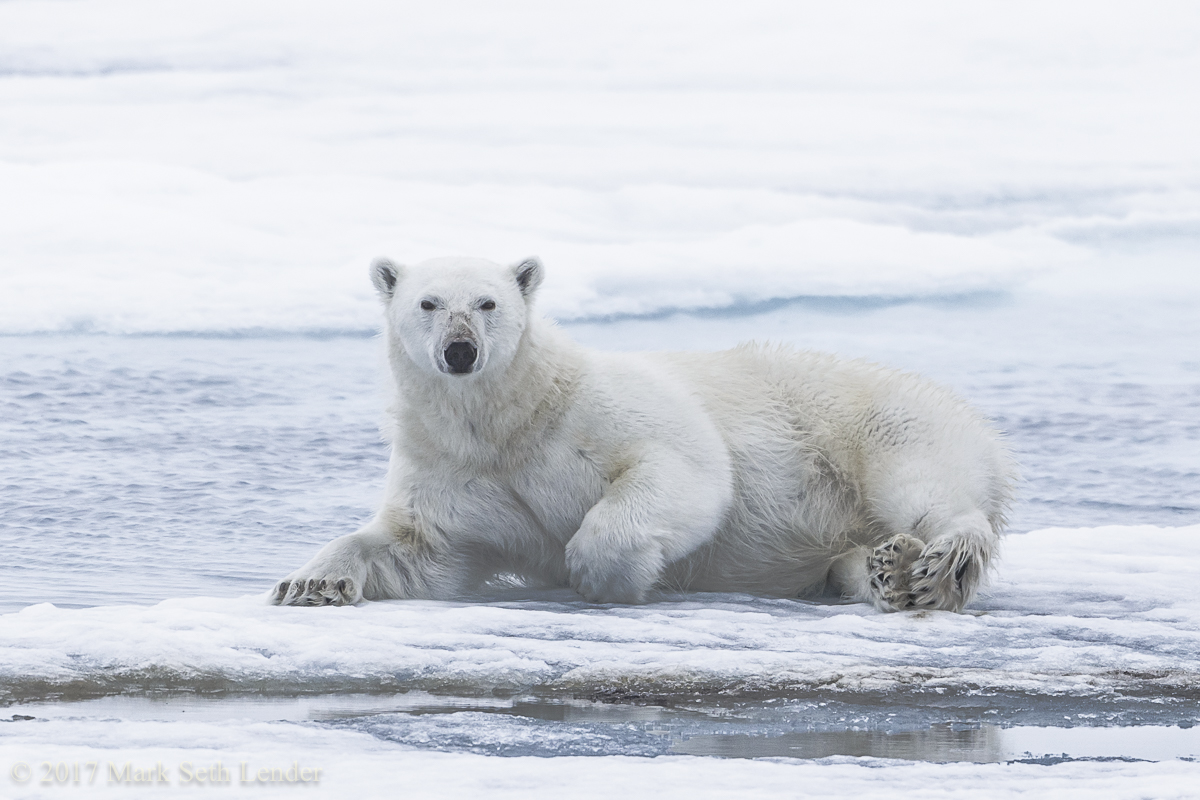 When we were within three hundred meters she rolled over on her side and took notice. She had seen the movement on the decks. As she approached, and by degrees, her eyes grew wide. I am all but certain she had never seen a human being. 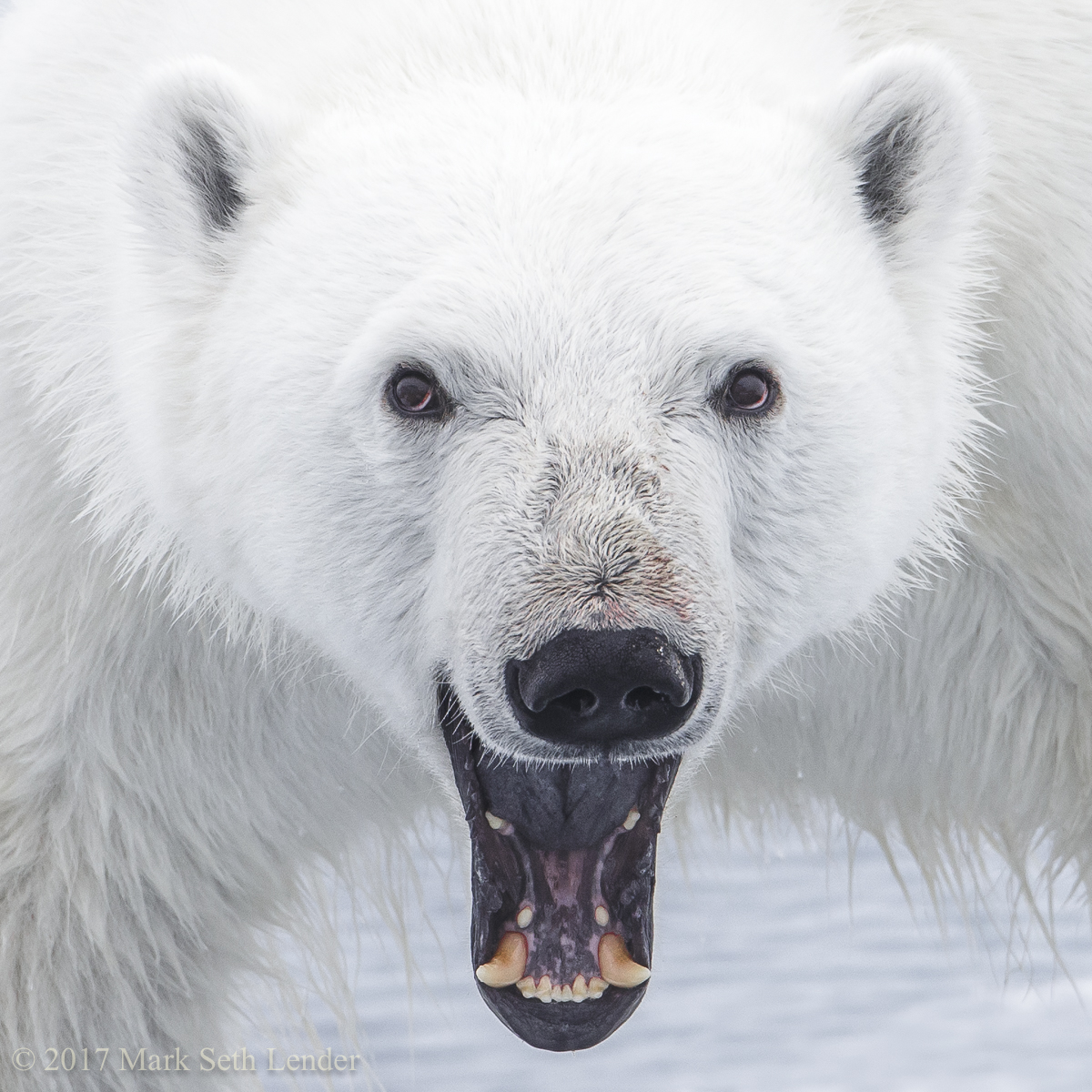 Why did she cross the rolling sea ice to meet my eyes and hold them the way she did? To study all of us the way she did? Except for the greater similarity within the difference between us. PolarBearMorphism? 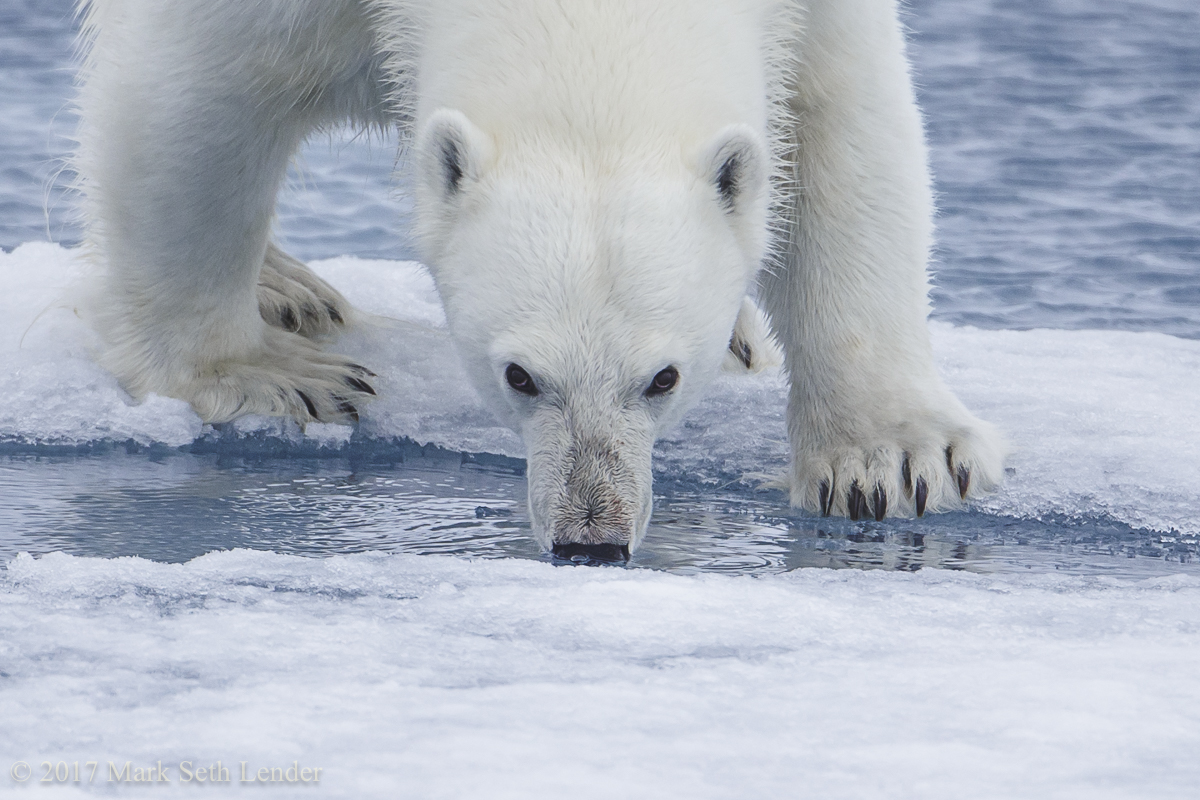 Polar bears are chess players. They can plan their activities (notably hunting) in multiple steps which means they can visual outcomes, a skill we assume animals do not have. But they do. I know this for a fact, and it is what makes polar bears in particular, dangerous. One of their hunting techniques is indifference, not even looking at their intended prey, and when they do, feigning greater interest in something else. Sometimes, they will hunt you, too. But not always. Because with intelligence also comes personality, and variations in attitude. I would go so far as to say that I “trusted” Standing Bear. Not enough to try to touch her, but enough to assume her primary interest in me (as is sometimes the case) was recognition. I have had the great privilege to spend time with almost a hundred polar bears. Standing Bear was and will likely remain my favorite of all time. 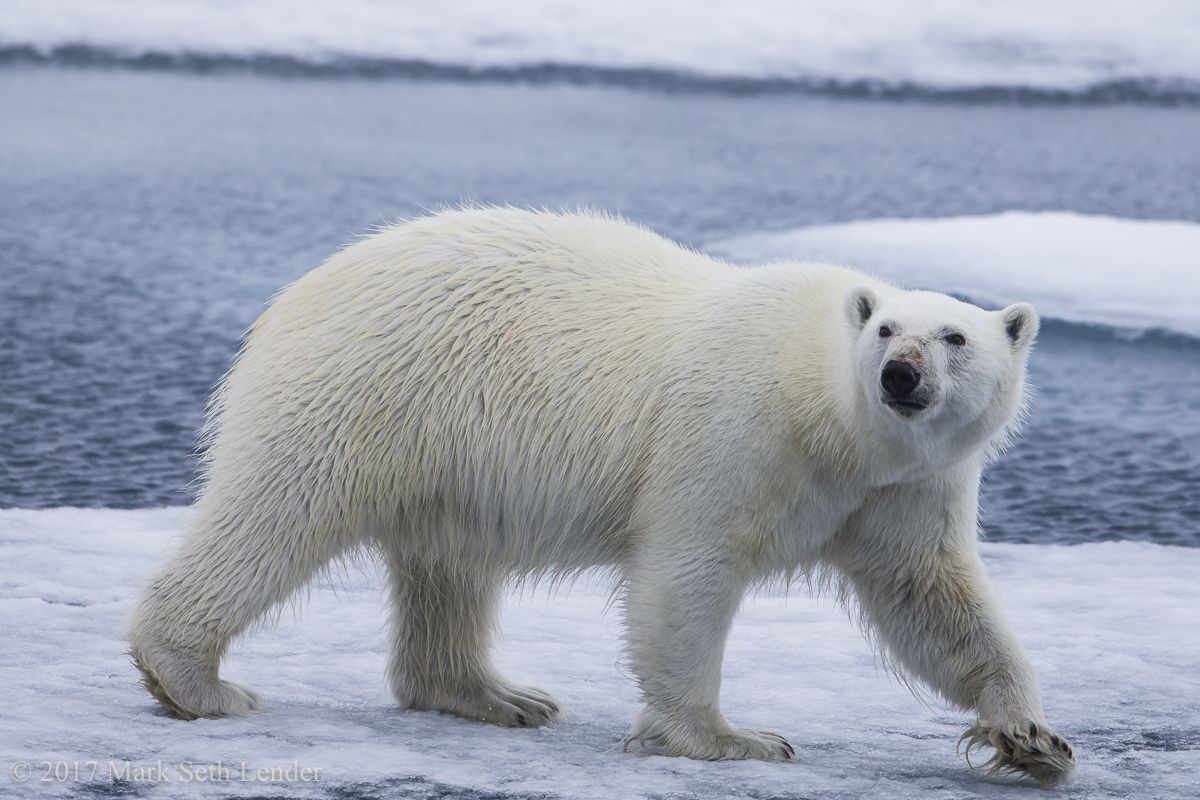 The fieldwork for this story took place in Svalbard, with One Ocean Expeditions.

My prose essay, Standing Bear Comes in Peace, can be heard (or read) on PRI’s Living on Earth.