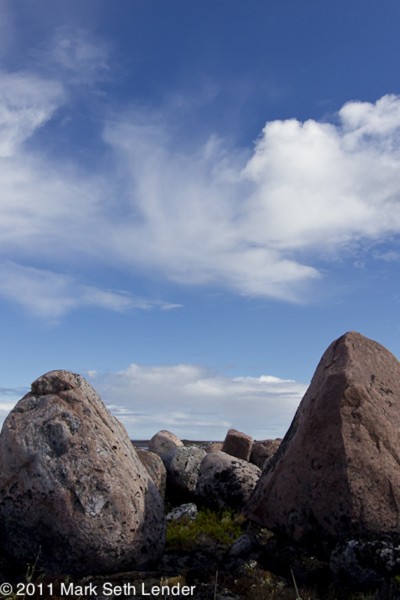 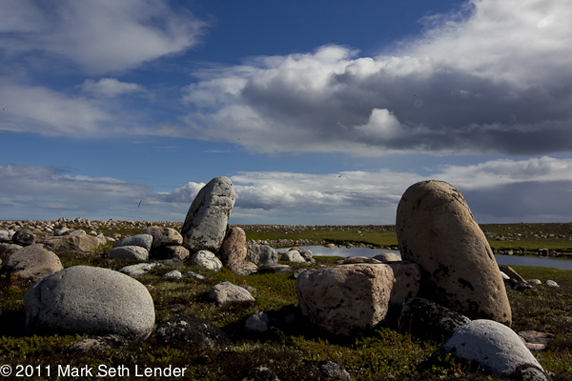 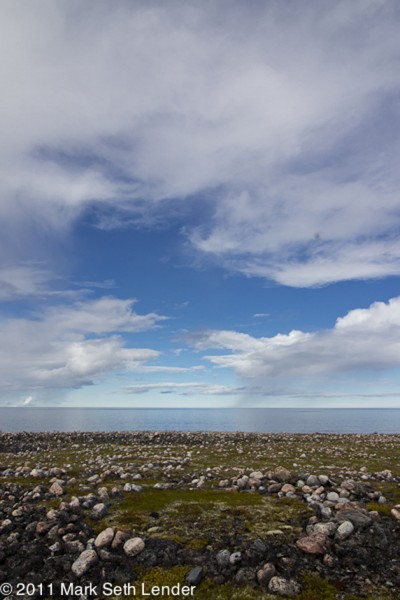 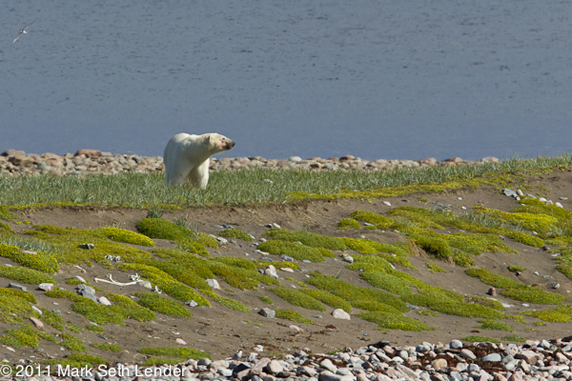 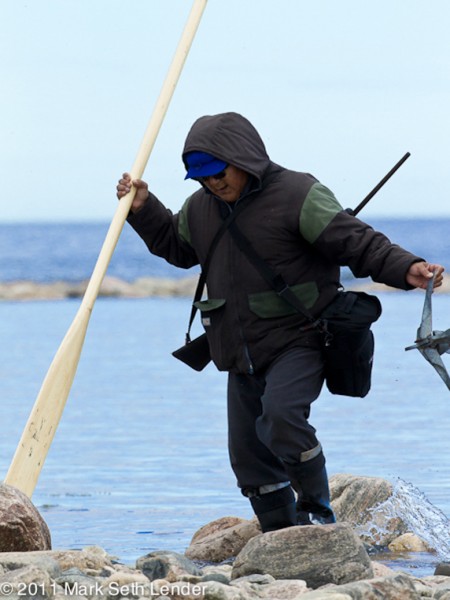 Billy Ukutak is someone you immediately trust.  Wiry, compact, an experienced hunter.  To see the bear up close so you can photograph the bear – without the bear taking your picture in the only way he knows how – requires the same knowledge a hunter owns. Knowledge gleaned from a lifetime of observation and the inevitable close calls he’s had in the past (have to learn fast to survive out on the land). You wouldn’t want to come out here with just anyone.

Arvia’juaq – “the island where we hunt Arviq, the bowhead whale” – is a line of stone and sand low enough at the low point a tall man can see over it, strong enough to keep the ocean out – no more. Here the Paalirmiut Inuit have come in the summer months for almost a thousand years. Close to shore – no matter – it is a wild and ancient land. Stone circles where the People made their tents dot the high ground. Pairs of upright blocks mark out where kayak were cradled after the hunt so their skin hulls wet from working the sea could dry in the sun; There are alter stones where offerings were made. Mounds of large pebbles where blubber was safely cashed close to frozen ground are everywhere, for in the past, polar bears did not venture here. Not so now…

Five bears have swum from shore to feast on the carcasses of whales. Not the Arviq for though the name survives the namesake does not and where there were many now there are almost none. The Americans and the Brits and lastly the Japanese and the Norwegians took care of that. Instead, Inuit men hunt belugas. Small by the standard of the great whales, you see them glistening, whitecap white against the blue and green water of Hudson Bay in late summer. They congregate this time of year in the warmer inlets and the mouths of rivers where fresh water, having drained down off the tundra has been heated by arctic days that are almost pure light, and all those hours of sun. Inuit when they kill one (unless they have dogs to feed) take only the fat. The bears would prefer that also but make do with the meat, seven or eight hundred kilos left behind for every whale butchered on the beach. Thus Polar Bears around here associate us with food but nevertheless react to us in fear, most of the time.

Billy tosses the anchor up on the reef, a natural breakwater of surf-rounded stones, and we share our own small feast. Caribou and onions cooked all together, and nothing else. “Hunter’s Meal,” he says, “it’s whatever you’ve got.” And the next thing he does before we head inshore is fire a host into the water. A two foot circle boils where the slug discharged it’s energy, ripples spreading out in a turbulent circle. All the arctic terns that were fishing off the reef scatter and if the bears did not know we were here, they do know. “Gotta make sure it’s working right,” Billy says and slings the rifle over his shoulder. Safety on, nothing in the breach, and a pocket full of cartridges at easy reach.

Sure enough, at the top of the ridge, we are seen. One polar bear, then another, start coming this way. I have put us where people around here do not, and should not go. You can’t blame the bears. The bears are just being bears. Though there is no imminent threat, for the first time (and not the last), we are the ones who are being hunted.