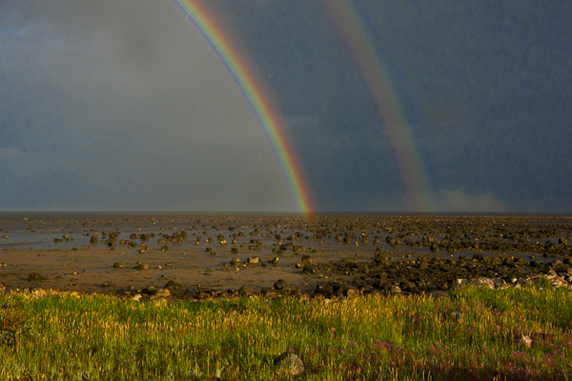 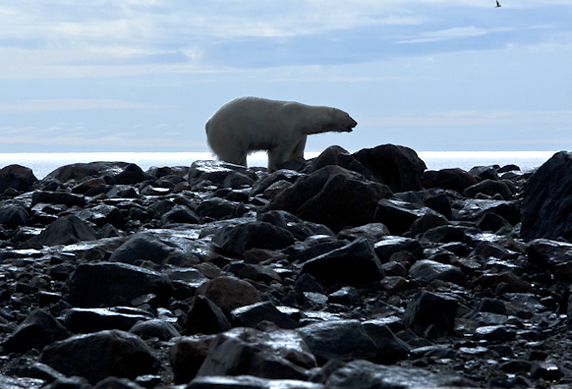 The storm of the night before is gone. There was a rainbow, huge even in the vast expanse of Hudson Bay and the rocky flats that go on for miles and miles.  It lasted for a long time, almost till the sun went down.  Now, only a thin edge of cloud which always lies in the east at sunup creases the horizon. It is not a perpetual dawn. Just long. A light that begins at half-past three and continues two hours more before the sun, orange and harsh and stripped-down, rises unceremoniously.  Unceremonious because despite all this waiting when it happens it happens all-at-once.  Stripped-down because it is the elemental of itself, without a touch of moisture in the air to clothe the nakedness.

All that is an hour away, this world still ruled by the dark of the inlet, the sea strangely brighter than what it reflects and studded with boulders, all black, like a mirror backed in mercury the polish here and there worn through.

In the shadow-lit landscape three polar bears come out of nowhere. They climb up and onto the point. Two together move further out. One stays, a cutout of bear just above where the razor of the sea makes a distant line.  He is a mountain, of darkness, the hump of shoulders and the bump of hips two worn peaks. And suddenly I am seen. And suddenly, he runs. This startles the other two and they run also and though it does not look fast because their improbable size destroys all scale, it is fast enough, and a good thing they’ve chosen to run the other way. Only memory reveals the whiteness of their hair.

And now the sun. And now the day. And that perpetual wind that warns of the cold that is to come.