There is a polar bear swimming through the slush at the edge of the floe. This year’s ice and last year’s ice and the porous remnant of a berg. All that melt, dispersed, makes the sea air cold. The bear, only head and face and sometimes the highpoint of his backbone above water looks cold although he is working too hard for that, trying to get away, from us. Seeing this, Gunnar Ross, the ship’s Master cuts his engines to dead slow so there is more drift than way. To give him room. The bear… speeds up. He looks back, and his lips part in a low growl we cannot hear for the idling of the screws and the steering gear and the floebergs scrapping the steel of the hull. He turns into a channel in the ice, and disappears. There he is again much closer. We’ve veered off, changing course; but the bear has changed course also and come out the wrong way – toward us. Now in his mind he is sure. We are after him. He is going to die. He sneers, and paddles on, faster and harder.

He is making 5 knots maybe 6 which seems an impossible speed and the wake breaks out behind him 40 meters in a widening V. It is too much. Even for a polar bear (who can swim without drowning 300 nautical miles). It is all being spent, right here.

The polar bear cannot give up will not part from his will to survive it is not in him. Nor is it in him to continue like this. In a last gambit he breaks stride and kneeing up like a child at a chair that is too high, clambers onto a flat of ice, the sea pouring out of his hair. 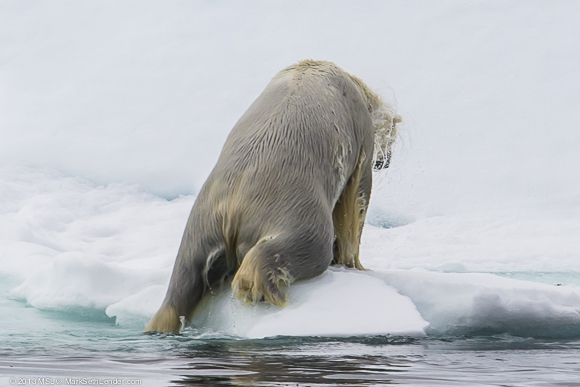 Water cascades from his face, the underbelly and swaying paws as he half walks, – half runs. 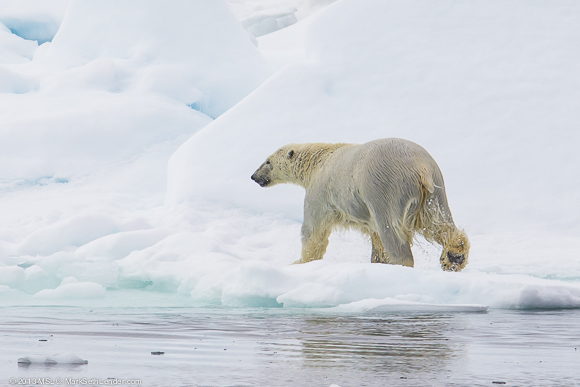 Then slows…. And looks… 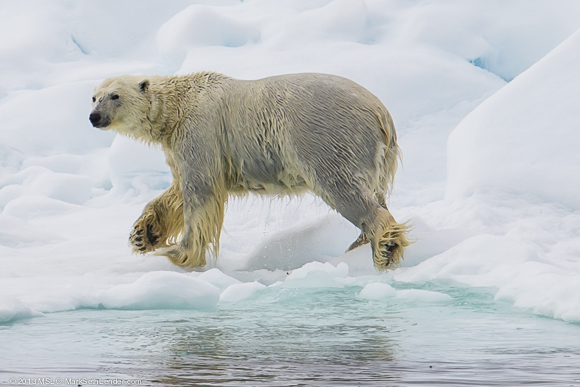 And comes to a stop. He stands broadside to our retreating ship, the dark skin showing through beneath the saturated white of him. And his head comes up, and follows as we head away and knows that he has won. 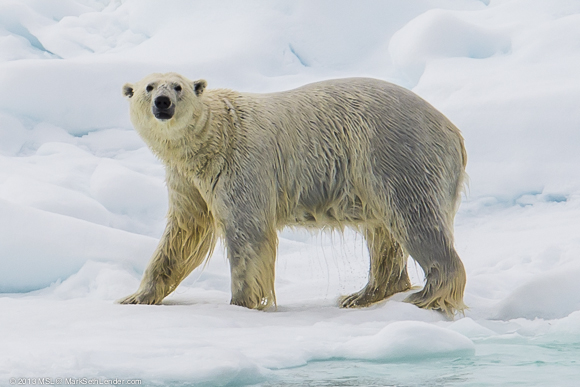 His rest is brief and all he needs, and clambers slowly back into the sea as polar bears have always done and swims, away, from our small sample of Humanity and into the brash ice, and beyond, until he vanishes among the icebergs that are white and blue as clouds on a fragile… glass… blue… sky.

Field Note:
In the high Canadian Arctic, crossing Hudson Strait with Adventure Canada, we had an encounter with a polar bear at the floe edge. The bear saw us and fled. A bear swimming away from you is not much of a story, and in any case, not the story you want to tell. The protocol (and I take it very seriously) is never stress the wildlife, much less chase after it. The ship’s captain was Gunnar Roos, a man on his retirement voyage with fifty years of mastery under his belt, and he did exactly the right thing: Back off, turn away. I was aware of that at the time but as a passenger on a ship the length of a football field it was not, in any case, anything I could control. I stood on the mezzanine deck, my tripod braced against the gutter below the rail, and kept my eye glued to the camera.

The polar bear was at a considerable distance and despite the longest lens I own only a small moving mark in my field of vision, indistinguishable from the floe ice except for the long wake peeling off behind him. Plus it looked like what I was getting was the back of his head. I had little hope of anything worthwhile from any of this. But the other rule right up there with “Thou Shalt Not Chase” is “KEEP SHOOTING!” So I did. And a good thing too.

It was not until that night when I scanned through the shots I’d taken of the encounter (several hundred frames) that I fully realized what had happened. I knew the ship had slowed, but not that the bear had sped up. Yet, there he was gaining more distance than we were giving way. Nor could I know (before the images were enlarged) that every time he looked back at us he grimaced, curling his mouth into a sneer. This is the great value of using the camera as a notebook, I am able to see what I could not otherwise have seen.

There is a low vocalization of displeasure bears make when they are afraid. I’ve heard polar bears do that before, mostly at each other, accompanied by that very same facial expression, that little sneer which just reveals the tips of the teeth. That was what I was seeing in the frames, the polar bear looking over his shoulder, paddling on, the expression on his face so clear I could not help but hear it clear as a ship’s bell: I am afraid. Yet there was nothing to be afraid of – not from us – and we’d been doing everything we could to indicate this to the bear. It was not perhaps 10 minutes later, when he climbed out onto the ice and the revelation was virtually forced upon him that he got the point.

I am used to animals, predators in particular, being far more aware and in control of circumstance than me. The way I usually put it is like this: Polar bear will outsmart you. In polar bear country, especially when you are on foot, It’s not a bad thing to keep that in mind. Yet, here was a polar bear, full-grown, scars on his face to prove his prowess and experience, and he was completely mistaken. Much as we might be followed by a polar bear, who simply happened to be going the same way.