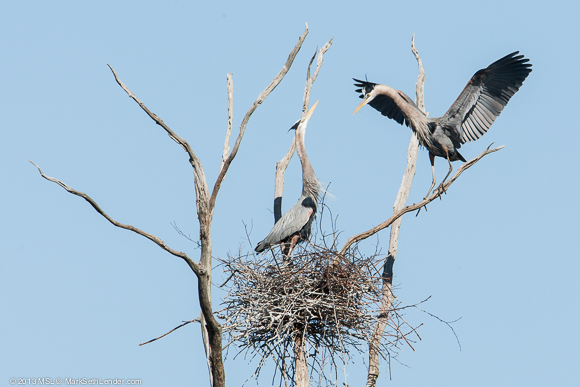 Introduction:
After years of searching, I found a large great blue heron rookery just off the Connecticut River with more than a dozen nests, and many herons. Over a period of four months I watched them build their nests and hatch their chicks and the chicks prosper and at last take flight on their own. It was wonderful to see, and as usual when I am in the field, I felt a deep sense of privilege. Rhapsody is based on that experience and its effect, like an ancient seal impressed in molten wax.

The dead oaks spread against the sky like mouths, lips thin as a spindle, grey as their own demise. Dry and cracked and begging for rain though they stand in a pond of water, thirsty though they have drowned. And it is not rain that will come to them, that will purpose this long last stand of their being. Although, like rain, it will come from the clouds, and the color of clouds.

In the still air, in guttural blue plumage swirling and shuddering in grey come whispering rolling like fog, Great Blue Herons! And they glide and glide then pull, up straight, waving wide grey-blue arms, and all in slow motion. Then grasp the thin dead branches wingtips spread broad as a balance bar, the tightrope quavering in their light and thin-legged touch. And do not settle but stand tall now in salutation, bright bills up raised each toward the other, mouths open like branches, their necks reaching, Great Blue Herons, lovers never touching as if yearning like a thirst never quenched except in the liquid of the eyes.

For the Herons have no water, but neither have they brought fire. And in their mouths they bring only branches, to be woven like baskets, to hold and caress the Source of themselves. Oval. Perfect. In the shape of the World before it was born and blue as a pale blue sky. Patient and practiced, now until the shell breaks open, it will open like a flower to breathe and unfold the feathers like petals, Great Blue Heron emerging small and imperfect to become, the only real and perfect mirror of the Self. And so continue, until in Time, all this is taken, and Great Blue Herons pass from this place like a whisper in thin in blue in air. 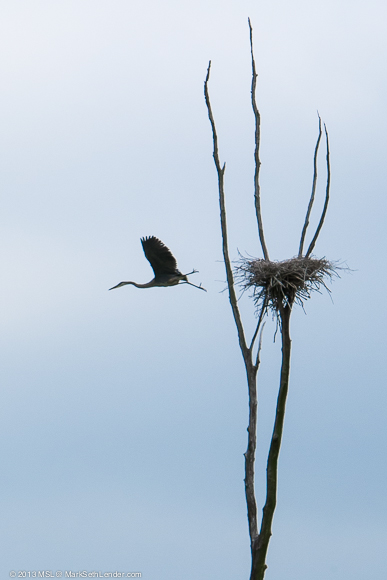 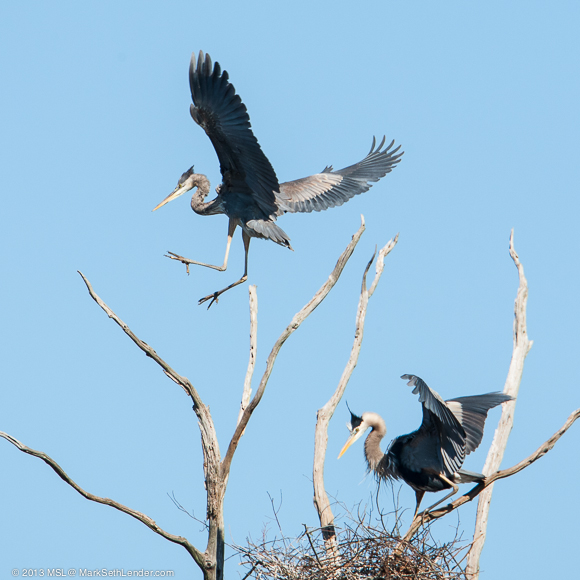 Great Blue Heron rookeries are frequently found in beaver ponds. The trees that drown as a result of the beaver’s enterprise provide perfect nest sites, sometimes two and three nests to the tree. But only ponds that are wide enough and deep enough to provide a sufficient separation from the shore – and thereby safety – will do. And such places are increasingly uncommon. The reason for the rarity is the great antipathy some of the human abutters feel toward the beavers. When the beavers construct their damns the humans are often faced with drowned lawns and water in their basements. Having built too close to streams, it is more convenient to blame the animals. The benefits – flood control, great diversity of wildlife, the pristine beauty of the pond (and the very source of great blue herons) – are ignored. Great blue herons are their own justification. But for us they beg a larger a question: What is the quality of human life without them? 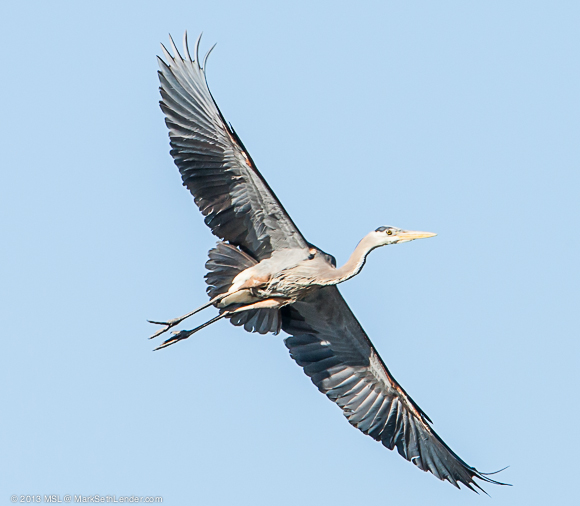 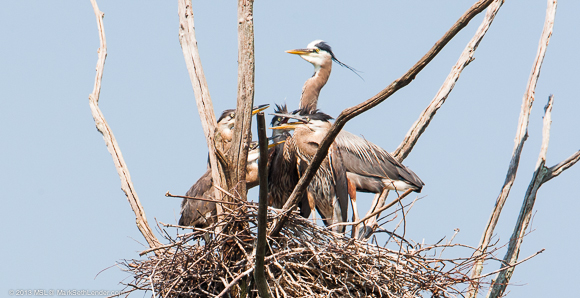 in the early morning a great blue heron rookery is filled with birdsong and the occasional basso profundo “Clunk!” of a bullfrog. But when the heron nests are crowded with hungry mouths and a parent is spotted en route with a crop full of food the rookery erupts with a primordial roar. I made the recording below in June at around 5:30 AM. Most of what you hear for the first minute and half is the chicks. Towards the end (at 1 minute 50 seconds) the deep throated Graaaahk! of an adult punctuates the rattling voices of her offspring. Close your eyes and perhaps like me you will imagine dinosaurs, plodding through a swamp, or grazing the salt marsh adjacent some warm inland sea. In fact there were dinosaurs on this very spot. And what we are listening to may not be that different from what they heard 100 million years ago of a summer morning.